14 Babies Relocated from an Adoption Centre in Jalpaiguri, After Complains of Improper Record Keeping Surfaces

Fourteen babies were yesterday relocated from an adoption centre in Jalpaiguri after the district Child Welfare Committee had received complaints that the facility was not keeping proper records of the infants.

The operation started around 11am and ended at 4pm.

While 11 babies were sent to state-run facilities in Cooch Behar, North and South Dinajpurs, three were admitted to the sick newborn unit at the district hospital here.

Subodh Bhattacharya, a member of the CWC, said the facility operated with a licence from the central government as a specialised adoption home. It puts up babies for adoption after they were sent to it by the CWC.

"However, in a recent investigation carried out by the CWC and the state Child Rights and Anti-Trafficking Directorate, it was found that there were no records of some babies sent by the CWC to the home. The directorate passed an order on January 16, asking the CWC to relocate the babies," Bhattacharya said.

Pijush Saha, the district social welfare officer, said the eight other babies were sent to the other homes under police escort.

During the operation, Uttam Bose, the president of ward 18 committee of Jalpaiguri municipality, where the BSG is located, said the public acted spontaneously in tearing down the flexes and posters put up by the home saying that the matter was sub-judice and the CWC was acting above the law.

"This home was not following rules while keeping babies. They used to virtually auction off babies, that was against the law. The people were incensed at the blatant manner in which the home members were trying to prove their innocence. The people were right in tearing down the posters," Bose said.

Chandana Chakrabarty, the chairperson of North Bengal People's Development Centre, the NGO that runs the facility, however, insisted that nothing was amiss in the running of the home. "All allegations against us are false. We have filed a case in the high court challenging a showcause notice issued to us by the CWC. We strongly object to the action taken today as the matter is pending in court. However, we extended all cooperation to the administration today," she said. 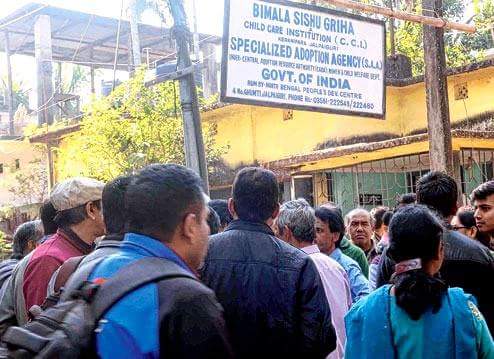