Will RBI help Bengal cooperative banks that were stuffed with old notes in first flush?

"A huge amount of Rs 291 crore in specified bank notes is lying with the cooperative banks, which are not being accepted by authorised banks/chest," said a "memorandum of specific problems" the chief minister sent to the RBI chief.

Sources said Patel, who met Mamata at Nabanna today, was apparently unaware of the problem and assured her that he would look into the matter.

On November 14, within four days of permitting banks to exchange the old notes, the RBI had barred district central cooperative banks from accepting deposits in the old 500 and 1,000-rupee notes and swapping them with new ones.

The restrictions followed claims that influential sections, especially from the political class, were laundering black money by depositing it in some cooperative banks under their control.

"The order of the RBI should be immediately revoked to provide relief to the farming community," Mamata said in the memorandum.

In the evening, a Bengal government official dismissed suggestions that a part of the Rs 291 crore might have been accepted by the district central cooperative banks in contravention of the RBI ban. Any such suspicion would trigger questions about the nature of the amount in the old notes.

"Just as scheduled commercial banks maintain reserve funds, the cooperative banks also keep liquidity at the branch level. So at any given point of time, there will be some cash with these banks," the official said

But a senior cooperative department official cited another reason. He said the old notes reached the cooperative banks between November 10 and November 14, before the RBI ban kicked in.

Other officials said cooperative banks in districts like West Midnapore, Burdwan, Malda and North Dinajpur had a large amount of old notes. "If the old notes are not accepted by the RBI, many of the banks would face a real crisis," an official said.

The RBI today mandated quoting of PAN or furnishing Form 60 (for those who do not have PAN) for all transactions, including withdrawal, for accounts where over Rs 2 lakh has been deposited after November 9 and where the balance stands at Rs 5 lakh or more. So far, quoting of PAN was required only for cash deposits of over Rs 50,000. The new rule is expected to impact rural areas more than urban centres. 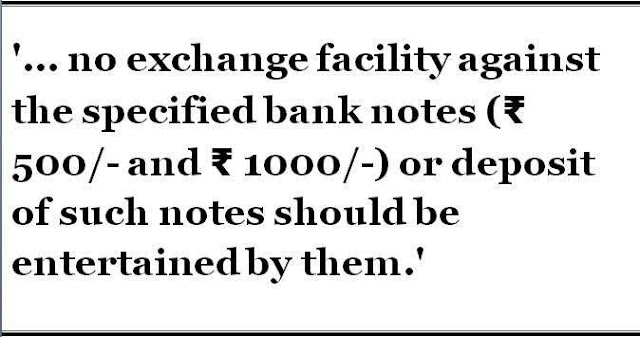