The families of two schoolgirls, who helped police bust a human trafficking ring and have been selected for the national bravery award, have said the duo was willing to take the prize from the Prime Minister but their identities must be kept confidential.

The two who study in the hills had posed as girls willing to leave the hill town to take up jobs in metro cities. Their act as decoys had helped the police catch three trafficking agents and the ring's kingpin in Gurgaon.

The letter sent by the Indian Council for Child Welfare says the girls would be presented the award on January 2017 by the Prime Minister in New Delhi. "You will also participate in the Republic day parade," says the letter.

"There is always this fear that the traffickers might have a grudge against the girls," said the father of one of the teenagers, explaining why the two families want the girls' names and photographs not to be published or circulated.

The families will go to Delhi for the award. "We just want the media to help protect their identity," said the father of one of the girls.

A former official of the National Commission for the Protection of Child Rights (NCPCR), who was previously associated with the Geeta Chopra Award for bravery, said such requests are rare. He recalled a similar instance when a girl from Haryana's Rohtak, who had helped expose a sex abuse racket in a shelter home, showed reluctance to come and take the cash prize and participate in the Republic Day parade because she feared for her security.

The former NCPCR official said the Indian Council for Child Welfare, which organises the prize, allowed the girl to cover her face when she took the prize from the Prime Minister. Her name was not read out. When the girl participated in the parade, she was given a biggish hat that would cover her face partially.

In Darjeeling on April 18 this year, an NGO called Mankind in Action for Rural Growth (Marg) received a request from a Nepal NGO, Maiti Nepal, to trace a 16-year-old girl reported missing from Sindupalchowk in the neighbouring Himalayan country.

"We were told that the missing girl could be in Sukhiapokhari or in the Samsing area of Kalimpong. We searched but could not find the girl. We then started searching for her on Facebook and found her profile," said Nirnay John Chhetri, the founder of Marg.

A friend's request sent by Chhetri was not accepted by the girl but the Marg team realised that requests sent by other girls to the Nepalese girl were being accepted.

"We became suspicious as photographs on her page revealed there was something more," Chhetri said.

It turned out later that the girl herself was linked to the human trafficking ring.

Over the years, Marg had formed clubs in hill schools that call themselves Students Against Trafficking. The two girls who helped the police were members of these clubs in their schools.

The two Darjeeling girls who helped the NGO and the police volunteered to be part of the plan to trap the traffickers.

Amit P. Javalgi, the Darjeeling police chief, and Deodoot Gajmer, the inspector in charge of Khoribari, provided help to the girls.

"I was a bit nervous and tense. However, my family supported me. Darjeeling police also provided us support," one of the girls said.

Her mother, who monitored the entire process of trapping the traffickers, said the girls were given training to speak Nepali as it is spoken in Nepal as they would have to pose as girls from that country.

'The girls were offered jobs with salaries ranging from Rs 25,000 to 35,000 to metros. It was planned that the two would pretend they had crossed over from Nepal to India through Kakarivitta and the trafficking agents would come to the border area, near Siliguri, to take them to the metros," the girl's mother said.

A trap was then laid to catch the agent who came to pick up the girls in June, Chhetri of Marg said.

"We made the agent speak to the 16-year-old Nepalese girl and the next day another agent was sent from Delhi to take the girls and she too was arrested," Chhetri said.

"Finally, Gurgoan police arrested the kingpin (of the racket), Gagan Verma. He is in custody now," Chhetri said.

The Nepalese girl, however, had fled Gurgoan. She was apprehended by Nepalese authorities following information provided by Indian officials.

The two schoolgirls did not seem bothered with publicity. "The most satisfying thing is that we helped save so many lives," one of them said. 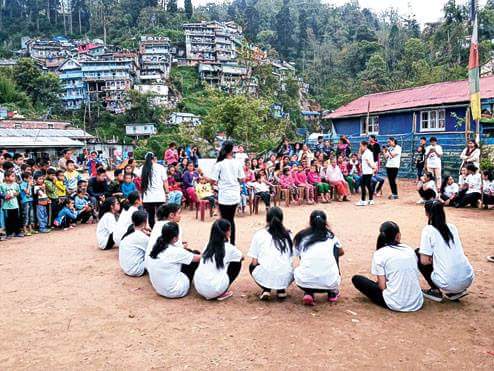