Murtaza Ahmadi, the Afghan boy who became an Internet sensation after pictures of him wearing an improvised Lionel Messi football shirt (below) went viral, finally got to meet his superstar idol on Tuesday. Murtaza, 6, met the Barcelona forward in Doha, where the Spanish league champions are playing a friendly match against Saudi Arabian side Al-Ahli.

Murtaza was quoted as saying: “I’m very happy to have met my hero. It is a dream for me.”

The shirt that made Murtaza famous was made out of a plastic bag, with the name Messi and the famous number 10 written on it with a marker pen. The shirt was made by his teenage brother Homayoun after his neighbour threw away grocery bags. “I love Messi, he plays really well, and I love the shirt my brother made for me,” Murtaza had told AFP at the time.

His family could not afford to buy him a replica kit. After the pictures went viral, Murtaza received a real shirt (below) from his hero.

Murtaza’s father Mohammad Arif Ahmadi had said then: “I want my son to become the Messi of Afghanistan.” 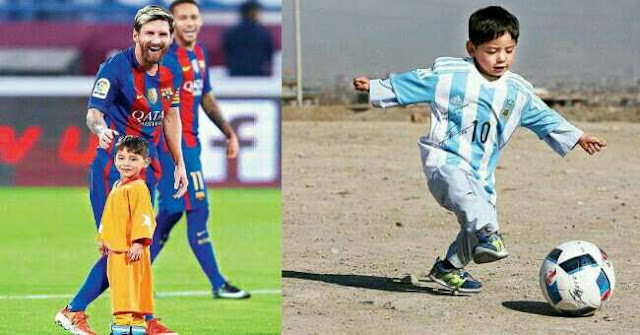