Nine cattle sheds that had come up on encroached land on the right bank of the Mahananda river were dismantled by the Siliguri Municipal Corporation yesterday.

The drive that led to the heckling of civic employees by the local people and the ransack of the ward office of the deputy mayor by alleged Trinamul supporters.

Around 9am, 60-odd workers of the SMC led by sanitary inspectors Ganesh Bhattacharya and Paromita Dutta and assistant engineer Dipak Dutta, along with some employees of irrigation department, reached the right bank of the Mahananda in Gurungbusty. They had excavators and were accompanied by a seven-member police team.

There were around 30 illegal cattle sheds which the SMC wanted to dismantle.

"We had even served notices on the owners of the cattle sheds, asking them to shift from the river bank. They, however, ignored the notices. That is why we initiated the drive today," a civic official said.

As they started dismantling the sheds one after another, a section of local people, most of whom were owners and their families, encircled the civic employees and heckled them. "Despite protest from the local residents, we managed to remove a number of sheds from the site. Some of our workers, including the sanitary inspectors and an engineer, were heckled. Policemen were posted but they did not intervene to control the mob," mayor Asok Bhattacharya said.

As the drive continued, another section of local people, who, Asok alleged, were Trinamul supporters, ransacked the ward office of Rambhajan Mahato, the RSP councillor of ward 3, and the deputy mayor, at Gurungbusty.

"The ransack was in retaliation for our drive to remove encroachments," said the mayor.

Krishna Pal, a senior Trinamul councillor, denied the allegations. "Left Front leaders had backed the encroachers for several years and let them build such illegal structures on the river bank. Trinamul has no connection with today's incident," he said. 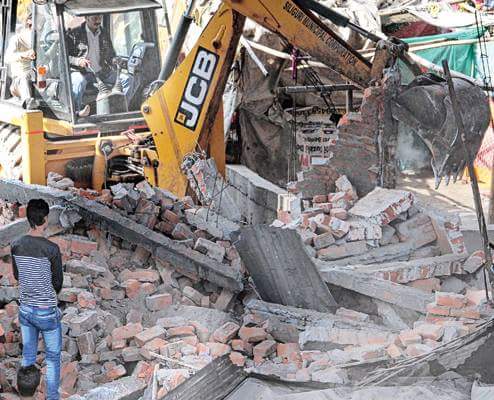