Tension in Panjipara area since today afternoon after bad remarks on CM Mamata Banerjee were spotted scribbled in various vehicles coming towards Siliguri from Kishanganj Bihar side.

One luxury bus coming from Bihar to Siliguri was set ablaze at Panjipara after anti-Mamata Banerjee remarks were found scribbled all over it. The bus was plying through National Highway 31 when some TMC supporters set it on fire this afternoon. NH31 has been blocked.

Several vehicles coming from Bihar since morning were spotted with anti-Mamata Banerjee.

It's said this was done at Kishanganj by a group of Bijrang Dal activists who were protesting Bengal government’s alleged failure to curb attack on Hindus at Dhulagarh in Howrah.

Situation remains tensed in the area. People are requested not to travel on this route and stay indoors. Please inform everyone. 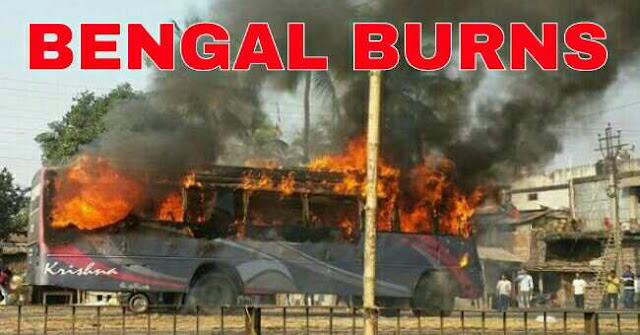