Nathula Sikkim - No Snowfall, No Tourists

The upper reaches of Sikkim are yet to receive snow, a delay that has happened for the first time and is making a number of tourists change their plans to visit places like Chhangu Lake and Nathu-la to experience the phenomenon.

Tour operators said the delay was affecting business as most people were either postponing their trips or going to other states.

Usually, the East district hot spots - Nathu-la at 14,400 feet and Chhangu Lake at 13,500 feet - receive snow by November-end or the first week of December and Yumthang Valley and Gurudongmar Lake in the North get snow by the last week of November till the end of March.

But this time, the places are still waiting for the mercury to plummet.

"Snow brings business. Thousands of tourists enjoy snowfall during this season. But this year, the business has been dull because of no snowfall. Many bookings are getting cancelled," said Binod Thulung, a tour operator.

According to him, tourists who visit Sikkim between November and February do so mostly to experience snow.

"If it does not snow this winter, it will impact our livelihood adversely," Thulung said.

Sikkim's peak tourist season is during March-April and September-October and last year, around 12 lakh people had visited the Himalayan state, including 50,000-odd who came between December and January.

"The first enquiry we get from tourists (visiting the state in winter) is whether there is snow. We are telling them to visit other places in West and South Sikkim this time," said tour operator Navin Rai.

Police sources at Sherathang check post on the way to Nathu-la and Chhangu said that on an average 600 to 700 tourists visited the two places in the first two weeks of December. But this year, the number has come down to 150 to 200.

"We are surprised to see that there has been no snowfall yet. Usually, the mountains are snow-capped by this time of the year," said a police officer posted at Sherathang.

A senior meteorologist in Gangtok, G.N. Raha, said: "The western disturbances which pass over the region during this period are comparatively weak this year and as a result, snow at higher altitudes or rain at lower altitudes in Sikkim is less."

He added: "The western disturbance is an extra tropical system that originates from the Mediterranean region and brings winter rain or snow over this region. Due to the (weak) western disturbances, the terrestrial radiation that the earth emits at night is getting trapped in the atmosphere and preventing the minimum temperature to fall."

Raha said last year, the snowfall had hit Sikkim at the right time because of strong western disturbances in the last week of November. "This is the first time that there has been a delay in snowfall here."

Phubra Lepcha, who runs a tour agency in Development Area, said two groups from Malda (of four persons each) had cancelled their trips to Chhangu Lake and Nathu-la after learning that there had been no snowfall this year.

Prabash Mondol, 45, a tourist from Calcutta, said he had changed his plans after he got to know there had been no snowfall. "I have already visited Chhangu Lake and Baba Mandir when there was no snow. This year, we wanted to experience snow but I was told that there was no snow at all. There is no point in going to Chhangu just to visit the lake," he said.

Another disappointed tourist, Sushmita Saha from Raiganj in North Dinajpur, said: "I have never seen snowfall in my life. My friends who visited Sikkim two years ago, had strongly recommended the place (Sikkim) during winters to see snow. I visited Chhangu Lake and Baba Mandir today but there was no snow."

Most tourists are planning trips to Pelling in West Sikkim, tour operators said, from where they can seen the snow-capped Kanchenjungha range. "At least they can see snow from a distance from there," said an operator. 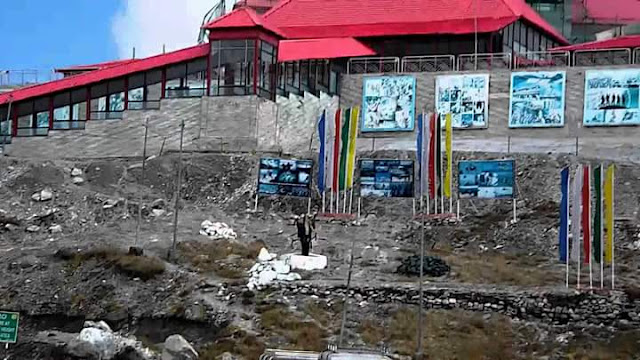