Around 40 families have moved into the 90-odd houses gifted by Manoj Munot on his daughter Shreya’s wedding.

A businessman from Maharashtra’s Aurangabad district has gifted 90 houses to the poor on the ocassion of his daughter’s wedding.

Manoj Munot, who runs a construction business in Aurangabad’s Lasur town was inspired by a local MLA, who first suggested the idea to him. After being prodded by his daughter Shreya, Manoj decided to gift her something that money can hardly buy – abundant blessings from the poor.

Usually, people spend a lot on weddings. But, one should also extend a helping hand to the needy. Even Prime Minister Narendra Modi has urged all individuals to serve the society.

Munot’s aid has earned praise and blessings in equal measure from those who now inhabit the 90-odd cottages that he built in Lasur. A beneficiary, Shab Ali Shaikh says she and family can now look beyond the basic needs of water & electricity.

I work as a domestic help in four households. Now I won’t have to worry about water and electricity here. Also, the burden of paying a monthly rent has been eased.

At present, more around 40 families have moved in and more are expected. Munot says that he steered cleared of an ostentatious wedding ceremony rituals and hotel bookings. The savings of nearly a crore and an addition of a few more lakhs ensured that there were funds enough for 90 housing units to be built.

Munot also added that the decision happened in first week of October and within two months the units were ready. 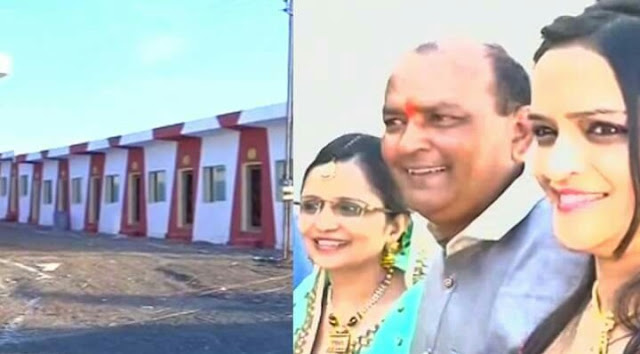