Been 7 years now, 1339 crore Siliguri to Sikkim railway line via Sevoke amidst hurdles

The project to extend railway link to Sikkim, which was flagged off seven years ago, is yet to start with the plan hitting one hurdle after another.

The tracks between Sevoke, about 30km from Siliguri, to Rangpo in Sikkim are to cover a distance of 45km. While India's rail connectivity in Sikkim is yet to start, China is rapidly expanding the railway connectivity to the border.

Two conditions set by GTA Sabha members for giving the mandatory no-objection certificate for tracks to pass through forests is the latest stumbling block to the project.

In February this year, the Supreme Court had given the green light for the tracks to be laid in the Mahananda wildlife sanctuary, rejecting the objections raised by environmentalists.

Gram sabhas, a panel of villagers to advise local panchayats, in the GTA area have to give the NOC on behalf of the tribal people. But the panels are not in existence as panchayat elections haven't been held in the hills since 2000. The rail link will pass through 26 forest villages.

The NOC from the forest dwellers is mandatory under the Forest Rights Acts 2006. As gram panchayats were non-functional, the Darjeeling district magistrate had sent the NOC, which was rejected by the Union ministry of tribal affairs. Last year, the ministry, the nodel agency for the implementation of the Forest Rights Acts, vested powers on the elected GTA Sabha members to perform the duties given to the panchayat members.

The rail project passes through six GTA constituencies whose representatives have set two condition for the NOC.

Narbu G. Lama, GTA Sabha member from Takdah-Teesta Valley constituency, said: "We are not opposing the rail project which is about national security and we, too, want it to be completed as early as possible. We, however, want the railways to form a committee with the GTA to oversee various issues related to the common public during the construction phase. Issues like compensation and damage that might happen during the construction can be dealt with by the joint committees. We also demand that land rights be given to forest villagers as mandated by the Forest Rights Acts 2006."

A senior official of Northeast Frontier Railway said there was no provision of forming any such committee as demanded by the GTA. "The railways obtain all necessary clearances and land from the state concerned. The project is then carried out by construction firms. We believe the GTA is trying to play a role. But it is not our concern," he said.

Under the project, 14 tunnels and 28 bridges would be built and there would be four stations at Riang, Gailkhola, Teesta Bazar and Melli. 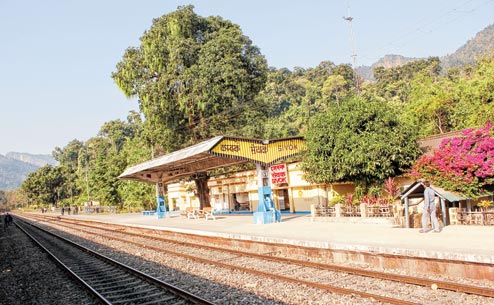