A minor Rajbangshi girl of Nepal allegedly trafficked was rescued and finally reunited with her parent. Her mother came from Nepal and took custody of the girl and expressed her gratitude to all the NGOs and GOs for their teamwork.

The mentally unstable girl was first seen at Gorubathan in a semi naked state  by Gorubathan Police on 28 October. With the help of Anugyalaya and Care of Needy Children Rightfully Nurtured (CONC'RN) she was helped to keep safe in Child Friendly Corner of Gorubathan Police station. Raju Nepali and the entire team of Duars Expressmail took the initiative for safe custody and to find out the parent of the girl.

After much effort her the 16 year girl was identified as a resident of Benga Busty of Bhadrapuir under Jhapa district of Nepal. She was married and a student and staying in Shyam Dewan Hostel of Ghoramara, Bhadrapur. Her parent and husband were also identified and the case was referred and handed over to Child Welfare Committee (CWC) Darjeeling for safe custody. Later she was sent to North Bengal Medical College and Hospital for medical treatment as she had some serious mental disorder and sometimes very violent to control.

Tiny Hands India brought her mother to India through Tiny Hands Nepal but on arriving at NBMCH on 30 October she was found to be missing from NBMCH and nobody could explain about her. Her mother had to return in grief and empty handed. A missing GDE was lodged by District Child Protection Unit (DCPU) Darjeeling.

She was again reported to have been traced by Siliguri police on 1st November but before she could be handed over to Children in Need Institute (CINI) she was again lost. After much hue and cry she was again found by Matigara police from a red light area and was given shelter at CINI open shelter home. There is need of further investigation on her mental condition and how she came to India.
The official procedure of rescue and handing over has been successfully accomplished in presence of Nepal Police and the concerned NGOs and governmental agencies working in the field. On behalf of the parent Duars Expressmail made the handing over process with the CWC. 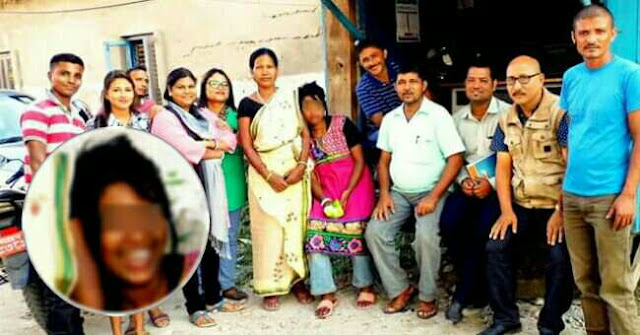