The New ₹ 500 and ₹ 2000 Notes Is Going To Destroy A Few Lives. Heres How Its Different

Prime Minister Narendra Modi took the nation by storm last night when he suddenly announced that the existing Rs 500 and Rs 1,000 denomination notes are being withdrawn from midnight and compared its importance to a “mere piece of paper” post midnight.

He claimed that the move is a part of a crackdown on black money corruption and hopes to bring billions of dollars worth of unaccounted wealth into the mainstream economy. “Black money and corruption are the biggest obstacles in eradicating poverty,” he said.

But that’s not all!

The government is also launching new notes of ₹500 and ₹2000 denominations on Thursday, November 10 and revealed that the new notes will be embedded with the latest technology.

The move has been made in an attempt to eradicate the black money issue and the new notes will be using state of the art indigenous nanotechnology (Nano GPS Chip) for the Rs 2000 notes.

But how does this NGC (Nano GPS Chip) Work?

For starters, the NGC doesn’t need any power source and only acts as a signal reflector. It acts as an authenticator for the note and, if tampered with, will end up damaging the note. So, yes, it’s a safe option.

The Government also has a dedicated satellite to track the notes. When the Government satellite would send a signal requesting location, the NGC would reflect back the signal from the location, giving precise location coordinates, and the serial number of the currency back to the satellite. Using this, the Government can now easily track one’s location and will also work even if it is kept 120 meters below ground level.

And how is it going to help eradicate black money menace?

Well, since every note can now easily be tracked, the Government knows where you save your cash. If you are one of those whose earning is in white, it won’t affect you. But for people with undisclosed money, it’s a scary thing. Any cash they save, wherever they want to, can now be taken down by the authorities.

The latest policy is that if there’s a relatively high concentration of currency found at a certain location for a longer period of time at suspicious locations (other than banks and other financial institutions), the information will automatically be passed on to the Income Tax Department for further investigation. 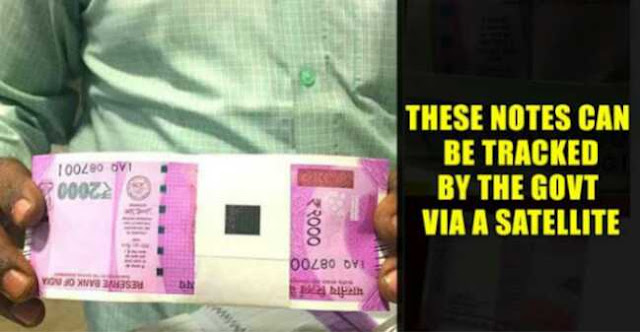