Strike announced by opposition on 28 Nov, but public against it on social media

A united Opposition on Wednesday called for Bharat Bandh on 28 November to escalate their protest against Prime Minister Narendra Modi’s demonetisation announcement.

More than a dozen Opposition parties, according to India Today, have decided to intensify their campaign against the note ban in the states where they are either in power or have a considerable presence.

Escalating their protest against the Centre’s demonetisation move and the resultant “cash crunch”, Congress workers on Wednesday held a demonstration outside the regional headquarters of Reserve Bank of India here and threw vegetables and milk on road.

Police briefly detained around 62 workers, including state Congress spokesperson Manish Doshi and 11 women, before releasing them all.

“These Congress workers gathered outside RBI’s main office building near Gandhi bridge during afternoon to stage a protest. They threw vegetables and poured milk on road, which obstructed traffic coming from Ashram Road. We detained 62 persons, including 11 women. They were released in evening,” Vadaj police inspector VG Rathod said.

Speaking to media persons after his release, Doshi stated the agitation was held to highlight the hardships being faced by the farmers, vegetable vendors and cattle rearers who are unable to sell their produce in market as a result of scrapping of Rs 500 and 1000 banknotes by the Centre.

“Poor people are hit hard due to demonetisation. Since farmers, vendors and cattle rearers are unable to sell their produce in market due to cash crunch, we came to RBI to sell the produce to the bank. We warned the authorities that we will dump these items if the bank doesn’t buy them and give money in return,” Doshi said.

Meanwhile, state Congress chief Bharatsinh Solanki convened a meeting of the party office-bearers and MLAs to chalk out a strategy to organise more such protests against “cash crunch”.

He announced that the party will organise more such protests, including a ‘Rail Roko’ agitation, in different parts of Gujarat on November 25.

“Tomorrow, our workers along with farmers would gather outside Collector’s office here to demand cash from authorities in exchange of vegetables and milk,” he said, adding party workers will stop trains and buses across the state on November 25 and organise bicycle and tractor rallies a day after.

“On November 27, our workers will contact all MLAs and MPs of BJP and demand (from them) Rs 100 notes against the scrapped notes of Rs 500 and Rs 1,000. On November 28, we will take part in ‘Bharat Bandh’ called by our leaders as well as by many other Opposition parties,” Solanki said.

Earlier this week, farmers had taken out protest marches in Amreli and Chhota Udepur districts of state against demonetisation and the ban on swapping of defunct notes at the district Co-operative banks.

While farmers at Wadia Kukavav in Amreli district had walked shirtless to express their anger, at Chhota Udepur, they dumped cans of milk outside the collector’s office and threatened to stop supply of milk to co-operative dairies. 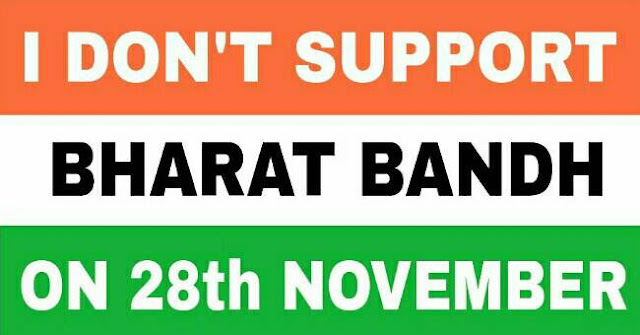