Revamp plan for DarjeelingHills Planters Club - Landmark shuts for a year, to re-open with new look

The Planters' Club, one of the most famous addresses in Darjeeling, will stay shut to visitors for about a year for a renovation that will add 31 rooms, a kitchen, a bar, a lounge and a bigger pocket pinch.

The club near the Mall, a sought after accommodation not just for its view of the Kanchenjungha but also because of its history, was shut recently.

Members said the revamp was being done to introduce modern facilities to an old-world ambience. The club is likely to re-open in September next year.

"Apart from day-to-day renovation, nothing much had been done to the old, fading structure. The place was in dire need for repairs as competition has definitely come up," said Major (retd.) J.S. Rana, one of the longest serving secretary of the club.

"The club will have more rooms, bigger rooms and more facilities. It will be visually more pleasing. There will be more comfort. But the taste, character and style will remain the same," he added.

The club, established by British officers, army personnel and planters in 1868, has not undergone any major renovation, apart from a quarter deck that was built after a portion of the structure fell off during the 1934 earthquake.

"No other part of the building was damaged then," said Sonam Gyaltsen, the president of Planters' Club who heads the 12-member managing committee that runs the club.

The club, originally called Darjeeling Club, used to function from a place called Thorn Cottage. In 1907, it became Darjeeling Club Ltd and shifted to the building from where it runs now.

"The building is two-storied with 21 rooms. The new structure will have 52 rooms in three floors. The height of the building will, however, remain the same. The room size will increase from the present 300sqft to 400sqft (each)," said Rana.

Earlier, every room had a fireplace. But in the new building, 21 rooms would have it.

"Of the 52 rooms, only 21 will have a fireplace as these structures were built with solid porcelain and it is not possible to add fire places in all the rooms. We will have fire places in the verandah and other rooms, like the lounge," Rana added.

The new verandah will be a closed structure with a bar and lounge and every room will have a tea and coffee machine. A new board room will also be set up, along with a gallery to house heritage items.

Lifts would also be introduced in the club, Rana said.

The Planters' Club has 550 members and is affiliated to 103 clubs across the country.

The land on which the club was built was donated by the Maharaja of Cooch Behar, Nripendra Narayan Bhoop Bahadur.

A.N. Banerjee, the proprietor of Happy Valley tea garden, was the first Indian to be elected as the president of the club in 1971 and Eudon Lhamu, a retired Indian Foreign Service officer, was the first woman to get a membership in 1992.

Now, the club has 20 women members. "The women come from all backgrounds. Members like Tseyang Norbu is an educationist and Geeta Dewan is a hotelier," said Rana.

"When I took over the club, 19 years ago, the finances were not too good but things have improved a lot these days," said Rana who pegged the renovation cost at Rs 2.5 crore.

Gyaltsen, who has been a club member since 1968, said: "The club has a chequered history. We have had people offering us any amount for some of the artefacts like the Maxim's Gun and the Snaffle's paintings."

The club has five original "Snaffles" paintings donated by D.G.S. Osbourne, the club's president from 1931-33.

Gyaltsen said: "The paintings are priceless and we are told they command a very high price in the international art market."

The club also has 20 wildlife trophies.

"A new Chinese restaurant (Plum Blossom) has come right beneath our parking space but even then, we will start our own kitchen at the club for the guests," said Rana.

"Artefacts like oxygen cylinders (used by climbers) and rare photographs of Everest expeditions will now be suitably displayed," Rana added. 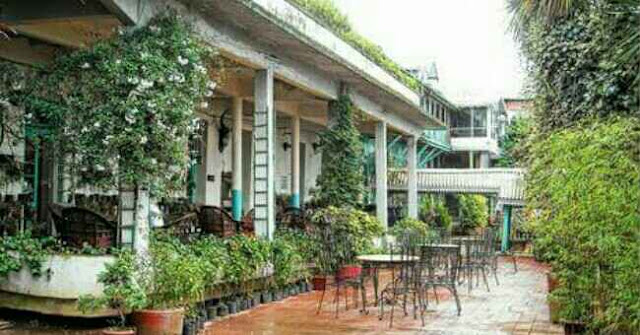 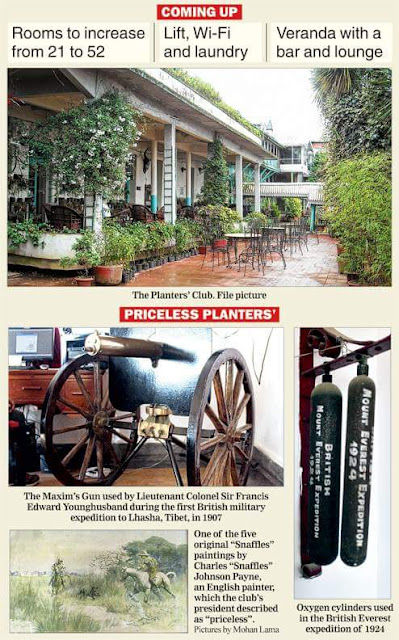 restory said…
I read the above article and I got some knowledge from your article. It's actually great and useful data for us. Thanks for sharing it.Hanging Planters Online India