Franklin D Roosevelt once wrote, “Courage is not the absence of fear but rather the judgment that something is more important than fear; The brave may not live forever, but the cautious do not live at all”… Miss. Mingma Sherpa and Miss. Srijana Pradhan  - two girls from Kurseong risked their own safety to save the life of a young girl and a guy who were being brutally beaten up in Siliguri, thus setting an exemplary example of courage in a situation where most people would not have bothered to care.

This is their story.

On the 11th of November, 2016 around 6:30 PM, Mingma and Srijana, who are associated with an educational consultancy– the Illuminati Institute of Skills and Training, Salbari – were heading towards Bidhan market in Siliguri after their office. The auto, in which they were riding, happened to pull over at a petrol pump near Biswadeep Cinema Hall for refueling. As they were looking outside, waiting for the auto to start, they saw a guy and a girl in their early 20’s being assaulted and abused by a group of around 50 to 60 people.

The guy was being brutally attacked with belts and punches, while the girl was pleading for mercy. Unable to see such brutality, the two girls got down from the Auto and went to the save the guy and the girl who were being brutalized.

On arrival at the scene, they tried their best to pacify the attackers, but the size of the mob only went on to increase and the situation took a turn for the worse. The blows started raining in from all directions and the uncouth crowd was so abusive, that the Srijana and Mingma too were assaulted.

Seeing that the goons were going out of control, amidst the raining blows, one of the two girls made an effort to dial 100 to connect to a police station. Seeing the girl was calling the police, the miscreants gradually started to disperse, and a few of the people around suggested them to leave the place.

The girls, although shaken by the incident, gathered their senses and took the couple into an auto and moved from there. The guy along with the girl decided to get off at the junction. There they would meet his brother and his friend who were with them before the incident.

Srijana and Mingma would later find that the two guys and the girls were from Siliguri, and were headed to celebrate his birthday at the City Centre. Unfortunately, the guy happened to hit an auto with his scooty near Biswadeep cinema hall and was having an argument with the autowala, when suddenly, a person appeared from outside and started manhandling the guy and the girl.
On this, the guy lost his temper and landed a punch back to that person. In no time, the miscreants started flocking from all the sides and started attacking them. They had meanwhile lost contact with his brother and their friend.

That is when the Srijana and Mingma appeared as the Saviours.

The guy could finally establish contact with his brother while in the auto and gave them their location and status. After seeing them off to safety Srijana and Mingma went on their way, shaken but, unbroken…  and a with happy heart that they could save the couple.

There is a certain section of people in Siliguri who suffer from an animal like herd mentality. It is almost every day we hear such cowardly instances of people being beaten up at accident sites by mobs. We are not sure what they gain by abusing and brutalizing people who are already in a state of shock after being in an accident. In the hills, if one person is being abused, others step in to prevent the fight… if a group is beating a single guy, others will shame the group…. “ghar sadey baan biralu na hu ta timaru… don’t be a tiger in your own neighbourhood, while you become a pussy outside…” is usually what our people tend to say.

We wonder, why can people in Siliguri not be like this? Mob violence following in accident, perhaps only happens in West Bengal. Particularly if one of the party involved in the accident happens to be a non-local, the accident victims themselves have to bear the burden of mob’s wrath…

This is a very inhuman and un-Indian behavior.

If you are from Siliguri and you are reading this, please talk to your friends and families… please tell them mob violence only exacerbates the problem and not reduce it. We hope those people in Siliguri who tend to become tiger in a mob, will realize that, someday they themselves or their family members may end up becoming a pussy in some other neighbourhood.

At the end of the day, had it not been for Srijana and Mingma the guy and the girl could have been killed or seriously injured.

Every story has a hero and we are glad, in this story we have two brave Gorkha daughters who saved the day… they have earned our respect, and deserve all the applause and salutations.

Inspired by their act of courage, Triveni Shukla told us, “such display of solidarity and courage of the hills people is worth sharing... Sincere standing up to wrong doing, when one doesn’t even know the victim is rather rare… I am thankful that Srijana and Mingma did what they did… as a note of appreciation I'll be giving them a bonus with their next salary.”

Now that is something, worth applauding too. 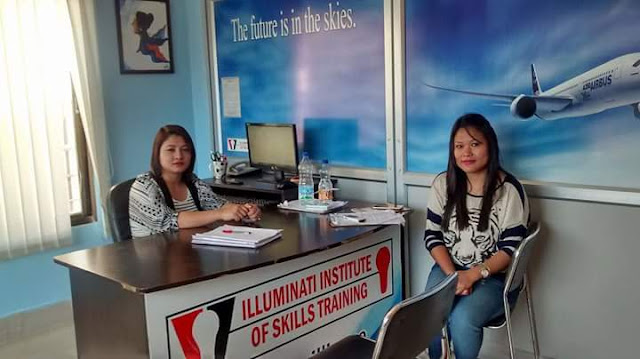