Two newborns in a cardboard carton who police said were rescued moments before being smuggled out of a nursing home in North 24-Parganas’ Baduria. The nursing home would allegedly tell parents their children had been born dead  and then sell the newborns to a so-called NGO.

Sohan Nursing Home had allegedly sold over 30 newborns over the past three years. Police sources, who provided the picture of the rescued newborns, said babies from this nursing home had been trafficked to several cities, including one in the US. When a police team swooped down on the nursing home, about 60km from Calcutta, on Monday night, they allegedly found three children about to be taken out.

One of them was returned to her parents, who are local people.

The parents of the other two children have yet to be identified. Eight people have been arrested, including the owner of the nursing home and the NGO, and charged with trafficking. 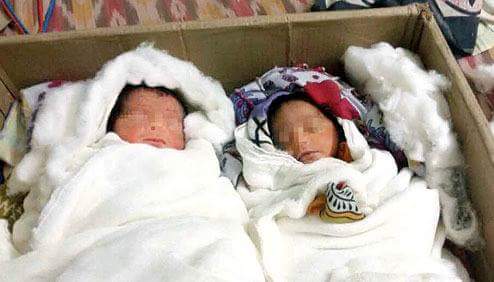