Minutes after demonetisation of high-denomination currency notes was announced last week, West Bengal Chief Minister Mamata Banerjee was up in arms, criticising the move. Her contention: the common man and the poor have been inconvenienced.

That apart, her detractors say the other concern within the Trinamool Congress is a deep-rooted fear of party funds drying up. It's largely an open secret that regional political parties like TMC depend on small-time traders and other local sources for bulk of their funding largely due absence of large-scale corporate donations.

Mumbai-based Progressive Electoral Trust gave about Rs 1.5 crore to the TMC during the 2014 Lok Sabha elections. That was the only corporate contribution to her party, according to a report by the Association for Democratic Reforms.

While the TMC's funding has been a bit of an unanswered riddle, Banerjee claims she raises money for the party through her artistic ventures - the sale of paintings and books.

"Someone must be buying her paintings. The question is who and how, is there any transparency?" asked Mohammed Salim, a veteran MP of the CPM.

"This ruling party of Bengal deals with raw cash...That is why, when all national parties are trying to take this issue to Parliament for a proper and serious debate, she is trying to pre-empt it."

Salim has alleged that the TMC has found a "smarter" way to handle its "unauthorised" funds by depositing them in some banks. "Raiganj District Cooperative bank has received a deposit of Rs 47 crore in four days from November 9 to November 13. How does a poor place like Raiganj get so much of hard cash to deposit in banks in four days?" asked Salim, the MP from Raiganj.

"I have demanded an inquiry into this financial discrepancy and have been assured by people in Delhi that it will be looked into."

Political observers, however, say the West Bengal CM may stand to gain politically, despite the criticism on her stand against the crackdown on black money.

"The main reason behind Mamata's hue and cry is her attempt to enter the national space against Modi. From that point of view, it has been a good political move," said Professor Biswanath Chakrabarty, a political analyst.

"However, Trinamool Congress in popular perception is linked with chit fund scams, black money and syndicate raj. While her populism will gain the confidence of a section of marginalised class, she might lose the trust of educated urban voters."

West Bengal has become a place where instances of political control over cash rich syndicates and stories of extortion from businesses - mostly small ones - are increasingly coming to the fore.

Rajarhat, on the north-eastern fringes of Kolkata, is a case study. It accounts for over 60% of West Bengal's real estate sales. This was the region that gave birth to the concept of syndicates and even gave them sanction in the garb of providing jobs. As a result, building material orders had to be 'mandatorily' placed with the registered syndicates at prices higher than market rates.

Rajarhat has at least 200 such syndicates, also known as 'land loser's cooperatives'. While the street perception is that these syndicates switched their allegiance after the ascent of the TMC in the State, the fact is that Banerjee had to intervene amid complaints of rampant 'extortion demands'.

"Rajarhat people are telling the country how to run syndicates. If you want to stay in Trinamool Congress, you have to abstain from such extortion rackets and syndicates," Banerjee told a workers' meeting.

The Income Tax Department has already zeroed in on some syndicates said to be dealing with unauthorised cash. Jan Dhan accounts, meant to financially empower the weaker sections, are being used by political parties to stash cash, a senior official of the IT department claimed.

At another level, TMC is bracing for another political fight in case the party comes under the scanner of any economic investigations. With Banerjee having raised the pitch already, TMC leader say any such move against the party would be construed an act of political revenge by the Centre.

While condemning demonetisation, she had made the point that her party had received three IT notices earlier.

According to Jay Prakash Majumdar, vice president of the BJP's Bengal unit, Banerjee is under pressure for two reasons. He said the returns filed by the TMC with the Election Commission in 2012-13 showed the party received donations of Rs 2 crore from two companies that never existed.

"Her vote bank consists of people involved in fake currency note rackets, cattle smuggling and bomb making. So, they are creating pressure on her to get the Centre's decision reversed," he said.

Central intelligence agencies, meanwhile, have filed reports with the Home Ministry that Banerjee's attack against Modi was aimed at leveraging the frustration of people who were inconvenienced. These agencies are also trying to locate the roots of TMC's funding.

Of late, the enforcement agencies have also become cautious. After two TMC MPs were summoned by the Central Bureau of Investigation in connection with the Saradha chit-fund case, Banerjee made a huge issue, calling it 'political vendetta'.

TMC leaders are tight-lipped about the party's funding and the impact of demonetisation on the party. "Banerjee has always reacted sentimentally when she sees common people in trouble. This is the only reason behind her outrage," said Subrata Mukherjee, a senior minister.

According to a party member in the ranks, unlike frontline political parties, the TMC does not have central coffers and its funds are kept with various leaders.

"We have accounts in districts and panchayat areas where we keep our party funds. Now we are waiting for directions from our leader or our general secretary. They will take the final call about cash deposits," the party member said. 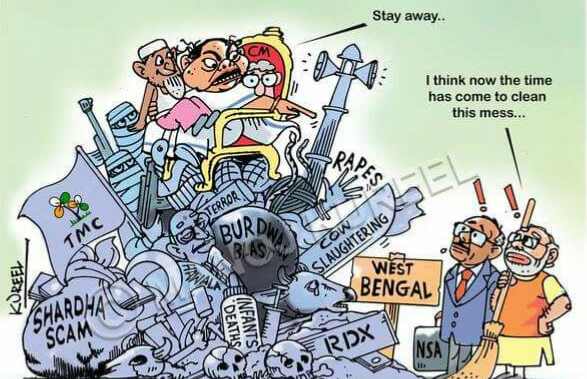