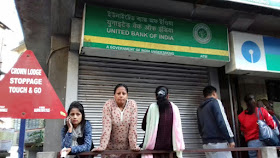 The ATMs of most of the banks in Kalimpong has been closed due to lack of cash which is creating problems for the ATM card holder. Almost 16 banks are located in and around Kalimpong Market area only where few nationalized bank ATM are open with long queue of Card Holders seen standing to take out 2500.Kalimpong has 10 Nationalized, 4 Private and Two State undertaking banks. Some Nationalized bank and some private banks ATM has not function from last 10 days due to Lack of cash in respective ATMs . The lack of cash in ATMs is resulting the increase in rush of respective Banks. State Bank of India , Union Bank of India along with HDFC banks are few which ATMs were seen open in last 15 days. The Other banks ATMs are either out of cash or have not been re-calibrated. The most problems faced is by Co Operative banks whose account holder has been barred from depositing money due to some officials issue at Higher Level Central Co operative banks unlike rest of the country. About 21 Cooperative societies have cash in their hand but are not able to deposit the same in the banks. Roshan Sharma Bank Manager of Kalimpong Co operative bank told that ‘this is the peak collecting season of the loans distributed. The cooperative societies have collected the loans but can deposit due to government order”. We are bringing cash from other banks to distribute to our customer that to a maximum of 4 thousand only”.

Sanjay Rastogi a bank account holder of a private bank in market place told that he is having problem with the banks ATMs as its has been closed from 9th November. He said the closed ATMs is near to his place but now he have to visited to other banks ATMS where the he can take only 2000 rupees only instead of 2500.

Axis Bank Branch Manager Pravin Pradhan informed that A total of 7 ATMs of Axis Bank is located in different places but are closed due to lack of Cash.