Chhath puja is a prominent festival for the North Indian state of Bihar and certain regions of Uttar Pradesh and Nepal.

Chhath Puja festivities span across four days and are observed to worship the Sun god and seek his blessings for the overall prosperity of the family. The fervour around the puja is marked by offering prayers to the Sun god, fasting and taking dips into the holy waters of Ganga (however, with time people have evolved and become less rigid about this rule).

The grandest festival for those who observe it, Chhath Puja is also a stringent one that encourages frugality and abstinence from food and water.

Legend
While the exact origins of Chhath Puja remain undefined and ambiguous, some believe it dates all the way back to Hindu epics, Ramayana and Mahabharata.

The two legends associated with Chhath Puja are as follows:

Ramayana
Said to be a descendant of the Sun god, some say Lord Rama has a lot to do with the inception of Chhath Puja. On returning to Ayodhya after the exile, Lord Rama and Sita observed a fast in honour of the Sun god and broke it only at the break of dawn next day--a ritual that subsequently evolved into the Chhath Puja.

Mahabharata
Prominent mythological character Karna is said to be the child of Sun god and Kunti. It is said that Karna religiously offered his prayers while standing in the water and distributed prasad among the needy.

Yet another story mentions how Draupadi and the Pandavas performed a similar puja to win their kingdom back.

Scientific significance
Some say Chhath Puja also has roots in science as it helps the human body get rid of toxicity. Taking dips in water and exposing oneself to the Sun increases the flow of solar bio-electricity that improves the overall functionality of the human body. Some also believe that Chhath Puja helps eliminate harmful bacteria and viruses from the body--thus preparing one for the onset of the winter season. 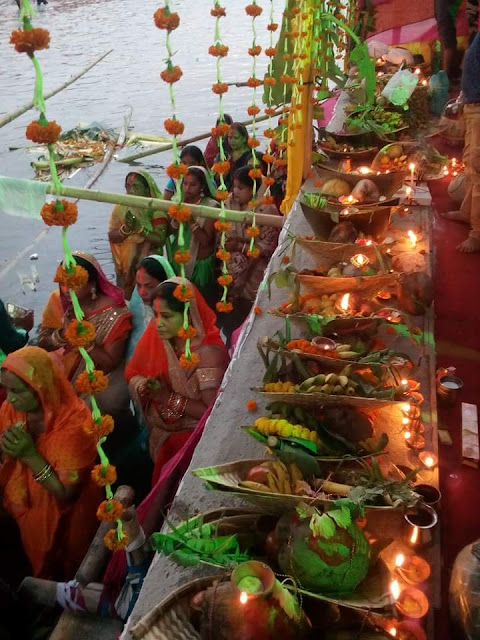