Have money but can't spend, tourists stumped by cash in Darjeeling Hills & Sikkim

- November 10, 2016
Narendra Modi's "note googly" has sent tourists into a tizzy. From hill towns of Gangtok and Darjeeling Hills tourists in various parts of West Bengal are struck with notes aplenty but hardly any money.

With only top hotels and restaurants in the town accepting plastic money , most tourists are in a quandary . Hotels too are unable to fathom what to do. Some began accepting Rs 500 and Rs 1,000 notes by late afternoon. "We cannot penalize customers for no fault of theirs. We are hoping banks will exchange the money when they reopen," said Kamal Banerjee, manager of hotel Sonar Bangla. Other hotels like Marvel International were refusing flying passengers but were giving concession to regular clients.


In Gangtok, too, tourists could not hire vehicles because of the cash crunch.Barap Namgyal Bhutia, vice-president of Travel Agents Association of Sikkim (TAAS), said operators had been advised to accept notes from tourists. "This is because small travel agents don't have cardswipe machines. Tourists are also averse to paying transaction charges on card payments," he reasoned.

Poushali Biswas, a resident of Bally who is vacationing in Goa with her parents, had the shock of her life when she realized the Rs 20,000 in cash she had in her bag was of no use. What made the situation worse was that she had to stay in Goa for two more days before boarding her flight back home, and she had only Rs 330 with her in change. "I got the news from one of my friends around 9.30pm. I immediately ran out of the hotel and tried to get change. I asked at the hotel counter, the shops outside the hotel, two liquor shops and a curio shop but managed to change just Rs 1000," she said. 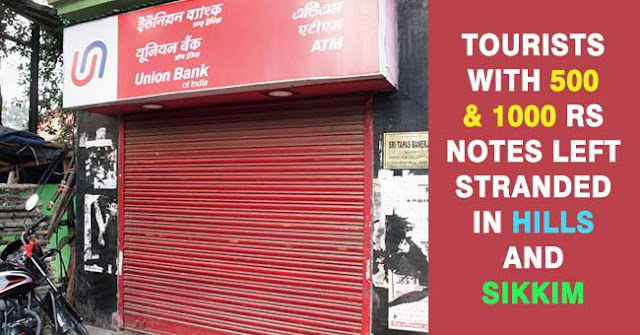