Chief minister Pawan Chamling yesterday announced that the Sikkim government would set up the first medical college in the state at Lower Sichey near here so that students aspiring to become doctors didn't have to go to other states for study.

The programme was organised by the state human resource development department and attended by governor Shriniwas Patil.

Chamling said the new medical college would be set up at the upcoming 1,000-bed super speciality hospital at Lower Sichey, around 5km from Gangtok. The hospital is being built by the government on a 17-acre plot.

"The medical college would be named Sikkim Institute of Medical Sciences. We will pursue the matter with the Union ministry of health and the Medical Council of India. We will see how things work out. I can't say how much time it would take to set up the college," said the chief minister.

Sikkim has just one private medical college which takes 100 MBBS students every year.

"More than 90 per cent of students go out of Sikkim to study MBBS, nursing and other para-medical courses such as physiotherapy, lab technology and radiology at different medical colleges. If a government medical college is set up in Sikkim, then they can take admissions here," said a senior HRD official.

Prakiti Shrestha, a student of Deorali Girls' Senior Secondary School who attended today's programme, said she was happy with the announcement by Chamling. "I am excited. I have decided to study medicine after Class XII," she said. 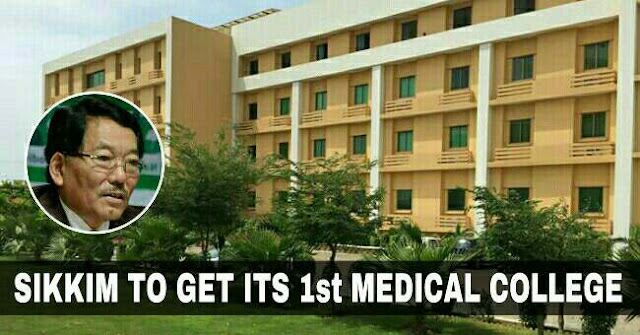