Fast Unto Death for Gorkhaland is Underway

Even though West Bengal Chief Minister Mamata Banerjee has repeatedly claimed ‘Pahar Hasche – the hills are smiling” in reference to political unrest in North Bengal, the newly formed political party Gorkha Jan Kalyan Manch (GJKM) has re-launched the Gorkhaland agitation. Since November 15, 2016 the President of GJKM, Krishna Chettri has started an indefinite hunger strike to press for Gorkhaland statehood. Unlike earlier agitations for Gorkhaland which were launched from the hills, the centre for this latest agitation is in Limbu Busty, Prakash Nagar, Siliguri.

Yet, you wouldn’t know of this fast or the unrest in the region if you looked at the national media, especially the English news. The only English newspaper to have reported on this renewed call for Gorkhaland is The Telegraph.

The demand for a separate state of Gorkhaland comprising of Darjeeling hills, Terai and Dooars region of north-Bengal, is the oldest such demand in India, with its roots being traced to the Hill Men’s Association placing the demand for a separate administrative unit comprising of these parts back in 1907. Since then, the demand for a state separate from Bengal has seen many champions, including the erstwhile undivided Communist Party of India who supported the formation of a state called Gorkhastan back in the 1950s.

The demand for Gorkhaland statehood caught the national fancy during the bloody agitation held between 1984-1988. Led by Subash Ghising, the violence resulted in the death of over 1200 people. This ended with the formation of Darjeeling Gorkha Hill Council (DGHC), a semi-autonomous body in 1988. 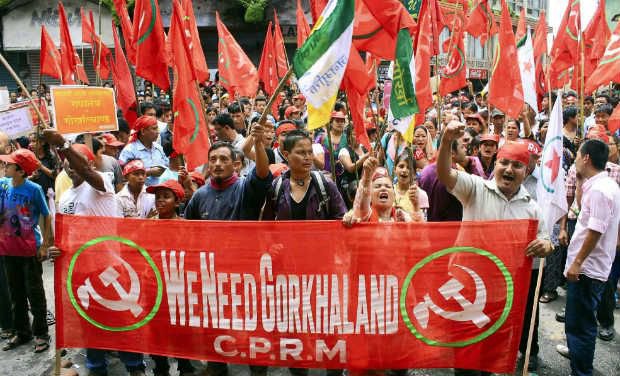 Ghising ran DGHC as his personal fiefdom, resulting in widespread corruption and nepotism. Discontentment was rife in the Darjeeling region in early 2000s, and seeing his popularity dwindle, Ghising had demanded that the hills be included under VIth Scheduled of the Indian Constitution which allows for an autonomous tribal form of governance. Although the then-CPI(M) government in West Bengal had formally passed the resolution accepting the proposal in 2005, there was protest in the hills as by then the people of the region had gotten tired of Ghising and saw this as another ploy to subvert the Gorkhaland statehood demand.

This discontent among the masses saw the emergence of Bimal Gurung, a onetime righthand man of Ghising, and his party Gorkha Janmukti Morcha (GJM) as the main political force in the region. The hills of north Bengal again underwent a series of agitations for Gorkhaland statehood starting October 2007, finally culminating in the formation of Gorkhaland Territorial Administration (GTA), another semi-autonomous body in 2011. Even though Bengal CM Mamata Banerjee had supported the formation of GTA and had promised to allow GTA to function as an autonomous body, she has failed to keep her side of the promise. The inability of GTA to function properly, coupled with widespread corruption and nepotism, has once again made the people of the region demand change. The people are now seeking to oust the GJM and are willing to support any political group that pursues the Gorkhaland statehood demand with sincerity.

This is the void which the newly formed Gorkha Jan Kalyan Manch hopes to fill.

When we arrive at the hunger strike spot, the mood is somber and serious as Chettri’s health has started to deteriorate. Six days without any nourishment has started to take its toll and Chettri’s supports are a worried lot.

Explaining the abrupt start to Gorkhaland statehood agitation through an indefinite hunger strike, Mingma Sherpa, the General Secretary of GJKM says, “we had already announced that we would start the Gorkhaland agitation from mid-November, and for an agitation to start we had to launch a political program, which would help our message reach the masses in Darjeeling, Kalimpong, Jalpaiguri, and Alipurduar districts. Since people are tired of politicians calling for strike and troubling the general public, we decided to take the trouble ourselves, and start with an indefinite hunger strike instead.”

As only the Party President Krishna Chettri is undertaking the fast onto death, we wondered why others had not joined him in keeping the fast. Sherpa explained, “this is the first time in the history of our region that a President of a political party has himself sat on a hunger strike. Prior to this, no other politician had taken such a fast… this is a fast for Gorkhaland, and it shows the sincerity of our top leadership towards the statehood issue.” 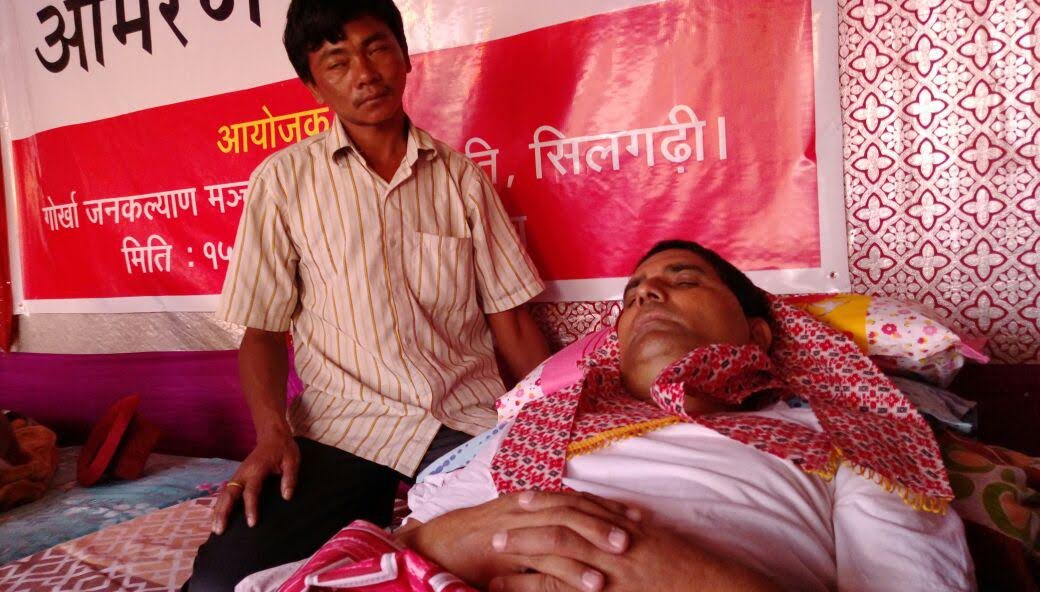 Chettri on his fast unto death | Source: Bijay Kafle

Although GJKM is a very new political party formed only in October of 2016, they claim to have received support from all parts of the Darjeeling hills, Terai and Dooars. Mingma Sherpa says, “the support to our hunger strike has been tremendous, even people from other political parties have extended moral support to our cause… this is very encouraging.”

However, it was obvious they are worried about the deteriorating health of Chettri. Sherpa accuses the West Bengal government of indifference towards their agitation and complained, “we have already placed our demand to both the Central and the Bengal government, the physical condition of our President is deteriorating, in the morning we noticed blood in his stool so we had gone Bhaktinagar police station to file a report, but they refused to accept it… we had thought, the administration would at least be concerned about a citizen of this country sitting on a hunger strike, but their indifference is reflective of the need for formation of a state of our own. In Bengal, we will continue to remain a second class citizen with no rights of our own.”

This feeling of being “left out”, “discriminated against” and treated as a “second class citizen” in Bengal is strongly felt in the region, particularly among the Gorkhas who see Bengal as nothing more than colonisers who have drained the region of all resources. 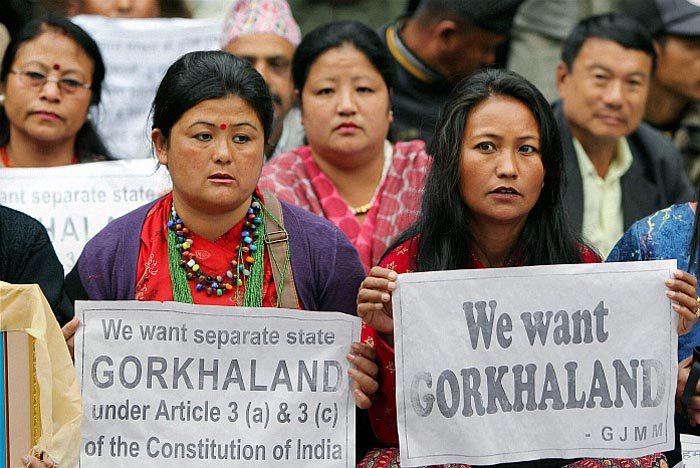 Toward the end of our interview, Sherpa appeals to the media, “the responsibility of making the voices of common people heard across the country rests with the media, sadly most of the media in Bengal are state-controlled, because of which our voices are not heard nationally. I would request you all to help us tell the story of our struggle to the nation.”