The Editors Guild of India (EGI) on Friday strongly criticised the one-day ban imposed by the government on NDTV India and demanded that the decision be rescinded.

The government on Thursday had ordered the Hindi channel be shut down on November 9 for its alleged revealing of “strategically sensitive” details during its coverage of the Pathankot attacks and followed the recommendation of an inter-ministerial committee instituted by the Ministry of Information and Broadcasting.

According to Hindustan Times, the committee had found the channel guilty of violating the broadcast norms by relaying information that could impact national security.

In a statement issued by the EGI, the organisation said that the ban on NDTV was “a direct violation of the freedom of the media,” and thus amounted to “harsh censorship imposed by the government [which was] reminiscent of the Emergency.”

The EGI added that by doing so the government had entrusted itself with the “power to intervene in the functioning of the media” and take punitive actions when it failed to agree with the coverage.

According to the statement, NDTV has maintained that its coverage was “sober,” was in the “public domain” and was not different from any information that had been covered by the rest of the media.

The organisation, in asking for an “immediate withdrawal of the ban,” added there were legal provisions available to both the Centre and the state to take actions against any “irresponsible media coverage.”

“After the dark days of the Emergency when the press was fettered, it is extraordinary that NDTV is being proceeded against in this manner.”

This is the first time such an order has been issued against a TV channel over its coverage of a terror attack under norms which were notified last year. 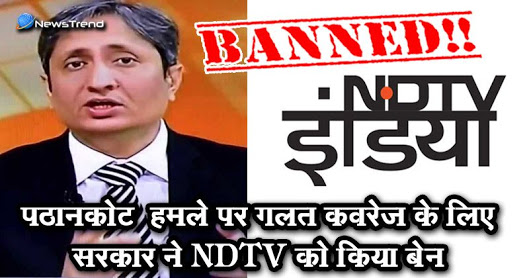 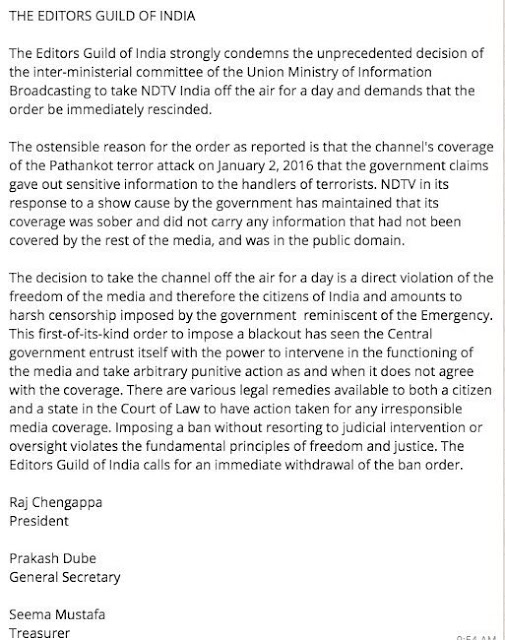