- November 03, 2016
Darjeeling police have arrested Bijoy Thulung Rai, the brother of a GTA Sabha member who is being hunted in an arms case of 2014. Bijoy's brother Sanjay Thulung's name had cropped up in an arms haul case in Assam. The Gorkha Janmukti Morcha, of which Sanjay Thulung was a leader, declined to speak about yesterday's arrest that has happened when the party is planning a series of public meetings from Sunday as a prelude to its announcement for a renewed Gorkhaland agitation. Elections to the GTA and panchayat bodies are scheduled next year. In the Assembly elections earlier this year, the party's margins in the three hill seats fell drastically for the first time, challenging its unassailable status. In the mean time, Trinamul has managed to make a few inroads in the hills, though it has not won any seat yet. Bijoy, 36, was arrested from Jorebunglow in Darjeeling yesterday in a different arms case registered in Rungli Rungliot. After the police started probing the arms haul in Assam, follow-up investigations in Bengal led to the rifle and live ammunition haul in Rungli Rungliot in 2014. Amit P. Javalgi, the Darjeeling superintendent of police, said the police arrested him "after we received information that he would be in the area. His name figures in a case registered at Rungli-Rungliot." The CID had filed an FIR on December 6, 2014, at Rungli-Rungliot and named Sanjay Thulung, Bijoy Thulung, Umesh Kami, Ganesh Chhetri, a resident of Assam, and 10 others. A rifle, 22 rounds of live ammunition and five leaflets of an unknown outfit, called Gorkhaland Liberation Army, were found from an abandoned building in 27th Mile, 45km from Darjeeling. Apart from Kami and Chhetri, all were untraceable.


After the police started raids to arrest Sanjay Thulung in the Assam arms haul case, the party tried to suspend him from the GTA Sabha. But as the state government is allowed to suspend GTA members, not the Sabha, the suspension was not effected. The Morcha has repeatedly said that its struggle for statehood would be "peaceful" and "democratic". Police sources, however, said their investigation has pointed to arms training undergone by the Gorkhaland Personnel (GLP) in Nagaland. The GLP, though disbanded now, was an integral part of the Morcha earlier and was used mainly to regulate crowds in rallies and gather supporters. There were allegations that Sanjay had arranged for a visit of an NSCN(K) leader in Darjeeling. Jyoti Kumar Rai, assistant secretary of the Morcha, today said: "We have nothing to say on the arrest. It is a criminal case and the law will take its own course. We are confident that this case will not be used for political purpose." Pankaj Prasad, assistant public prosecutor, said: "We asked for a police remand today to basically recover arms that had entered the hills earlier and to find out if there is a bigger nexus, to find details of who all have undergone armed training and other issues in connection with the case." According to the pieces put together by investigators, Umesh Kami, also said to be a GLP member, and Assam-based Ganesh Chhetri were arrested by Assam police from Chirang district on August 8 with a huge cache of arms which included an M16 rifle, two Beretta pistols, three .32 bore pistols, 300 rounds of 9mm ammunition, 80 rounds of ammunition of AK-series rifles, 198 rounds of M16 ammunition and 60 rounds of .32 ammunition. The ammunition that were found in the Darjeeling-bound Tata Safari were allegedly sold by the NSCN (Khaplang) group. In fact, three NSCN (K) cadres Sanjay Chhetri, Rahul Chhetri and Diku Chhetri, have also been named in the Rungli-Rungliot case. Sanjay Chhetri allegedly visited Darjeeling and met Thulung. Police had claimed in the FIR that Sanjay Thulung had provided Rs 13.30 lakh to NSCN militants from Nagaland to provide four months of arms training to 15 GLP cadres and other people from the hills from January 2013 onwards. Prasad said: "After the arrest of Umesh Kami and Ganesh Chhetri, the duo were tagged in a case of Bhaktinagar police station which related to recovery of arms in the Fulbari area (of Siliguri). Based on leading statements provided by the arrested duo, police was led to an abandoned building at 27th Mile, where the rifle, ammunition and pamphlets calling for an armed struggle was recovered after which the CID filed an FIR at Rungli Rungliot police station." "The arrested Bijoy had also received arms training," Prasad said today. Bijoy who was produced before Joydeep Bhattacharya, acting chief judicial magistrate, was sent to six days' police remand. "We had prayed for 10 days of police remand so that we could find that who all were involved in the case and also to recover arms that were smuggled into the area as there are information that more arms were smuggled in the hills earlier," said Prasad. Taranga Pandit, the defence lawyer who is also a GTA Sabha member and a Morcha leader, said: "We had applied for bail but it was rejected. We had prayed before the court that this is an old case and that investigation has progressed considerably in the case. Moreover, the accused suffers from a heart ailment." Pandit said: "Even though bail was denied, the court has asked the police to ensure that his health condition is looked after and that a cardiologist should check my client regularly. Family members will also be allowed to meet my client to ascertain his health condition." (Vivek Chhetri - Telegraph)


According to a police report submitted to the state home department, the arrested persons during interrogation revealed that they have been asked to carry the consignments of arms to Darjeeling. It could be gathered that some sections of local leaders in Darjeeling was trying to build an armed group that was named as ‘Gorkha Liberation Army’. The report also mentioned that the ruling GJM has split within and at present thre are two prominenet groups with one trying to prepare for a fresh armed struggle in future. The Intelligence reports particularly indicated at the Youth wing of the GJM – known as teh Gorkha Yuva Morcha – a large number of whom wre disillusoned with the present GJM leadership and they thought that the present leaders have allegedly “compromisd” on teh separate statehood issue by accepting the GTA. The Yuva Morcha leaders have talked about a fresh movement for Gorkhaland and Thulung was said to be an important functionary of the Gorkha Yuva Morcha. The report further says that the arms which were handed over to a courier company in Dimapur in Nagaland are of Chinese make. Police yesterday detained wife of Sanjay Thulung in the police station and interrogated her for several hours in the police station. She was later released from the police station. Thulung belongs to a family working in Glenburn tea estate. The report mentioned Thulung as an ex-member of Gorkhaland Police (GLP), a force raised by Bimal Gurung during the Gorkhaland movement in 2008. Thulung was made the vice president of the Gorkha Youth Morcha, GJM sources said. While GJM leaders including Benoy Tamang, vice president of GJM and Roshan Giri, GJM general secretary could not be reached, GJM MLA and senior leader of the party, Harka Bahadur Chhetri termed Thulung as a ‘decent and qualified’ person. “We are surprised to hear his name in this connection. There can be a conspiracy and his name could have been planted to malign GJM. We want a proper investigation to take place in this case and the truth to come out.” 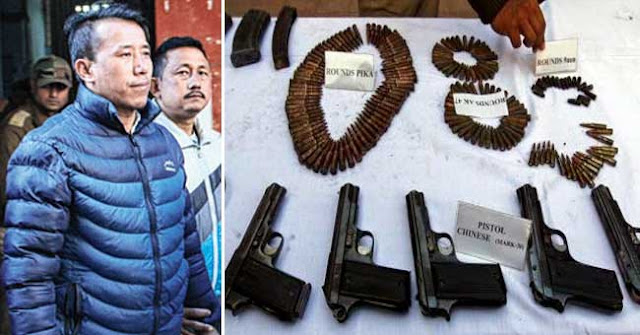