A goods wagon hauled by a Darjeeling Himalayan Railway steam engine chugged into Darjeeling station yesteray for the first time in 25 years.

"Last year, we got to know that it was possible to charter freight wagons and we are very proud to have a freight wagon rolling after 25 years," said Peter Patt, who had chartered the ride for a Germany-based tour group called Tanago. "We could accommodate 30 people (this time). We will be back again in March next year."

Patt who describes the group as "steam lovers" had booked the train to take photographs and document the wagons.

The group has also chartered a passenger train pulled by a diesel engine. "The group started from Siliguri on November 21. The team will travel in the diesel train that would move ahead of the wagon train," said Dipen Thakuri of Clubside Tours and Travels that is co-ordinating the tour.

The group that includes people from Australia, Japan, New Zealand and the USA reached Darjeeling last night and left for Kurseong today.

The DHR which started operating in 1881 was primarily built for freight traffic to transport tea and other materials from the plains to the hills.

Before the 1920s, open wagons with eight wheels were used. Most of the covered, four-wheel wagons were built at the workshop in Tindharia - the loco that pulled the wagons today is called Tindharia 01-B.

The DHR had preserved the wagons to be used as "heritage charter" trains. 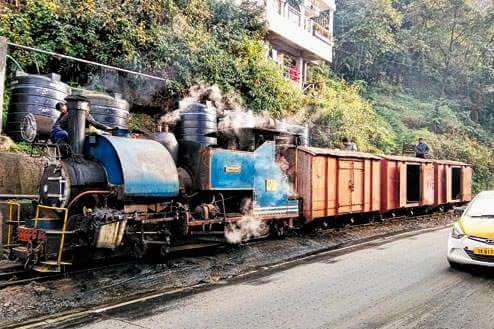