- November 09, 2016
A railway crossing at Dalkhola, which is on a key highway to north Bengal, will be shut from midnight to 6am from November 9 to 15, blocking at least 700 goods-laden trucks as well as 350-odd night buses.

The railway crossing, which is on NH34 that connects south and north Bengal,will be closed for repairs to the railway tracks that run through it.

The closure has also brought under the glare general tardiness to lay a proposed bypass and overbridge at the point that is the most congested railway crossing in north Bengal.

It has also created worries for night-time travellers who take buses as the North Bengal State Transport Corporation has not rescheduled its bus services between 12am and 6am, saying it was unaware of the the Northeast Frontier Railway's decision. 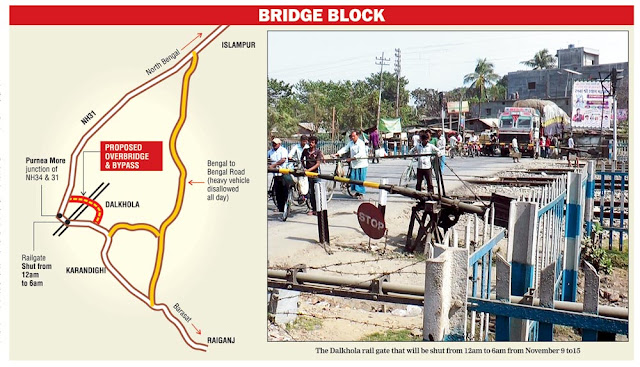 The Telegraph looks at the alternatives available to truckers and commuters.

The alternative available is the Bengal-to-Bengal road that branches out of NH34 and joins NH31 near Islampur. But there is a catch.

The North Dinajpur district magistrate has said that only light vehicles and ambulances will be allowed on the Bengal-to-Bengal road which is 20-foot-wide.

"It (the road) is not suitable for movement for heavy vehicles," district magistrate Ayesha Rani A said. "We will post policemen at all necessary points to ensure no heavy vehicles take that road," she said.

This means that while people coming south from Islampur or going northwards would be able to travel in their private or small vehicles, trucks and buses will still be blocked from travel between 12am and 6am.

The railways have said the tracks have been damaged because trains that do not stop at Dalkhola used to race through the area.

"Along the rail tracks near the level crossing, trains are supposed to move at a speed of 110 kmph. But because of deterioration of the road and rail tracks at the crossing, trains move at a speed of around 30kmph now. We have decided to carry out extensive repairs at the crossing. That is why it was planned to block road traffic at the crossing from 12am to 6am for the next seven days, starting from tomorrow," D.L. Meena, the additional divisional railway manager of the Katihar division of NFR, said over phone today.

In 2004, an overbridge was planned over the railway tracks at the Dalkhola railway crossing, along with a 5.5km four-lane bypass to skirt the congestion at the crossing and Dalkhola town, where the highway becomes narrow.
The bypass would commence from Mohammadpur (on the outskirts of Dalkhola) on one side, followed by the proposed overbridge and converge with NH31 near Purnea More.

The project, however, has not started. First, the state could not hand over the necessary land to the National Highways Authority of India till 2014.

After getting the land, the NHAI has invited tenders from construction firms five times since July last year, but failed to draw the attention of bidders till before September 2016.

NHAI officials said four firms had responded to the last attempt. The NHAI, however, is yet to open the bids, carry out the selection process and assign the project.

The tentative time for completion of the project is one-and-a-half years.

Every day, 32 pairs of passenger trains and a number of goods trains take this route.

According to railway sources, the gates at the level crossing are closed for five to seven minutes to let a train pass.
"Particularly during day time and evening, the gates are closed frequently. Several times, I got stuck with my bus twice or thrice and it took over an hour to cross the level crossing," Dinesh Sarkar, driver of a private bus and based in Siliguri, said.

Considering the heavy traffic during the day time, local vehicles like pick-up vans, trekkers, maxi-cabs, autos and battery operated rickshaws also move into the highways, it often happens vehicles beeline for a stretch of around two kilometres, once the gates are closed.

"If you are unlucky, you can't cross the crossing even after halting for movement of a train. After the gates are lifted, vehicles start moving at snail's pace and may be, after a gap of 10-15 minutes, as you reach close to the crossing, the gates come down again as another train will have to pass," Sarkar said.

"During night hours, the movements of trains are less and also local vehicles remain off the roads. Traffic is a bit better during this time."

Bhaskar Dutta, an employee of a private firm who often visits Raiganj, said: "Vehicles stranded at night will start moving only after 6am. It would take at least two-three hours for these vehicles to move out of this stretch of the highway and crossing. Meanwhile, long distance buses which leave early in the morning from places like Siliguri, and the local vehicles will be on the roads. Also, gates at the crossing will start closing more frequently. Altogether, it would be an awful situation,"

During the night hours, 350-odd long distance buses, both government and private, move through Dalkhola. These buses connect some of the north Bengal districts, Northeast and Bhutan. Added to these, around 700 trucks move along the route in every night.

Vehicles moving from south to north Bengal or Northeast on NH31 move through Bihar, enter Bengal again and then head for the Northeast.

No emergency plan like changing the schedule of long-distance buses had been drawn up by the North Bengal State Transport Corporation till this evening.

When The Telegraph asked Subal Chandra Das, the managing director of NBSTC about the railway crossing block, he said he had no inkling of such a traffic restriction.

Every evening, over 50 buses of NBSTC head for Calcutta and other locations in southern parts of the state. "I have no information so far," Das said.

Private transporters, however, have information in this regard.

"We have approached the administration and have requested to allow movement of one-fifth of our total buses (they run around 50-odd buses in through Dalkhola) through the Bengal-to-Bengal road during these six hours. The administration is yet to make a decision," a representative of North Dinajpur Bus and Minibus Owners' Association said.

However, none of the officials of the administration could speak of any arrangement of basic amenities that the stranded passengers would require during these six hours.
Dalkhola