- November 16, 2016
Bhutan resident Tshering Chorden has emerged as a beneficiary of the Indian government's decision to call time on the existing Rs 500 and Rs 1,000 notes. As the Himalayan kingdom's currency has appreciated against the Indian rupee, Chorden, a resident of the border district of Samtse, is getting a bigger bang for his buck. The middle-aged man frequents markets at Chamurchi and Nagrakata in Jalpaiguri to buy groceries and other essentials. Earlier, he used to get goods worth Rs 90 by paying a note of 100 ngultrum or Nu, the Bhutanese currency. However, for the past one week, he has been getting goods worth Rs 110 by paying Nu 100, courtesy the Indian government's demonetisation decision that has precipitated a crisis of notes of lesser denominations.

"I regularly visit the markets in Chamurchi and Nagrakata and buy various commodities. Over the past few days, the informal exchange rate has reversed and our money is being valued at 10 per cent more than the Indian currency by traders and shop owners in those markets," Chorden said. The fact that the Bhutanese currency is fetching more Indian goods can be described as an appreciation - unofficially though - of the ngultrum. People living in the bordering areas of the neighbouring country, such as Nainital, Sipchu and Charghare, come to Indian markets regularly. "Earlier, the Bhutanese currency, which has the same value as the Indian rupee, was used extensively in the Dooars. However, the use of the currency was restricted by the Indian government in 2012. But over the past few days, the ngultrum is being used again in the area as local businessmen are running short of cash of smaller denominations," a source in the Jalpaiguri administration said. 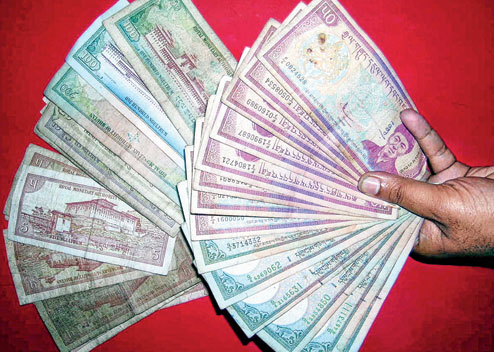 In Bhutan, the Indian currency is always in demand because of the neighbouring country's dependence on India for its imports, the payments for which are made in rupees. But now, the demand for the ngultrum has exceeded the demand for the rupee, prompting traders and shop keepers in Chamurchi and Nagrakata in Jalpaiguri and Birpara and Kalchini in Alipurduar to accept the Bhutanese currency. "It is illegal to transact in currencies of any other country. We have reports on the use of Bhutanese currency here. We want to make it clear that if any written complaint is lodged, we will take steps against the accused," said Mukta Arya, the district magistrate of Jalpaiguri.

She has spoken to representatives of various banks, who have assured her that the supply of Indian currency notes will soon normalise across Jalpaiguri and its neighbouring districts. Sources in the Bhutan government said they were aware of the unofficial appreciation of the ngultrum in the border areas and the Royal Monetary Authority (the equivalent of the Reserve Bank of India) was trying to restore the official parity between the Indian and the Bhutanese currencies. However, stern words from the administration on both sides haven't yet had the desired impact. "We are accepting Bhutanese notes ranging from Nu 5 to Nu 100. We are using these notes to even pay the local people as Indian notes of smaller denominations are not available in adequate quantities," said Rezaul Alam, a trader in Chamurchi. (Telegraph)
Bhutan Dooars

Mr. Rubben Visser. said…
Your blog had very good knowledge and that gave huge instructions and that was really commendable ideas. you have provided good knowledge on this topic please share more information with us.pure SSD chemicals solution for cleaning Notes