While in majority of the communities across South Asia - Rakhi is seen as one of the most important festivals, for Gorkhalis its Bhai Tika... and we believe that no other festival in the world celebrates female empowerment more than Bhai Tika.

So how did it all Began?

This is a story told to us by our elders and she would tell us this story every Bhai Tika, so I am sharing the same...

A long long time ago, a Kirat King was on his death bed and Yamaraj had come to take him to the next realm. However, the king's sister would not let her younger brother die just yet. So she pleaded with Yamaraj to spare her brother's life, but Yamaraj would not listen to her.

She kept on pleading, but Yamaraj instead of hearing her plea, started to get angry at her and later became infuriated.

So Yamaraj in anger took the King with him towards Patal lok... but the Sister refused to give up. Instead, she challenged Yamaraj to a duel.

Yamaraj was livid, being challenged by a woman and tried to brush her off, but the sister held her ground and told Yamaraj, "I am not moving... either you have to kill me or spare my brother's life."

Infuriated, Yamaraj accepted the challenge and dueled with the Sister.

Yamarj being the God of Death was mighty and powerful, and all that sister had on her side was her love for her brother, and the conviction that love would prevail over death.

The fight lasted for a long time, and Yamaraj was surprised that try as he might, he was unable to defeat this woman.

Towards the end, Yamaraj made a mistake and lifted his hand too high, the Sister took her chance and struck him through the gap.

The blow could have killed any ordinary person, but as her opponent was Yamaraj, he did not die... however Yamaraj's head was cut open and erupted in blood, due to the strong blow meted out by the Sister.

Stunned, Yamaraj pleased and impressed with the valour and conviction of the sister told her, "Ok... I won't take your brother with me now.. you can take your brother back, but this cannot go on forever... he will have to die someday, as that is the Law of Nature..."

The sister was relieved... In addition to being brave, she was a smart thinker... so she said, "I will set some conditions and when those conditions are fulfilled, only then you can take my brother."

These are the conditions the sister set

"1. You cannot take my brother away, unless the Tika, I put on him, fades away."

The sister put Paanch Rangi Tika’ consisting of five colours (red, green, blue, yellow and white) on the forehead of their brother. This way the Tika took forever to fade and her brother continued to live.

"2. You cannot take my brother away, unless the circle I draw around him dries out"

The sister used Oil instead of water to draw 7 ringed circle around her brother, which took forever to dry out, and her brother continued to live.

"3. You cannot take my brother away, unless the garland of flower I put on him wilts"

The sister used Makhmali phool [Globe amaranth] to make the garland, and since this flower lasts and never wilts her brother continued to live forever.

It is said that Yamaraj could take the brother, only after his sister grew very old and died before him.

This, as our boju used to tell us, was why we do the rituals we do on bhai tika...

The Okhar (walnut) which our sisters break today is supposed to symbolize the breaking of Yamaraj's head in that epic battle... so every year our sisters send a signal to Yamaraj... don't come near my brother, else what I did to this Okhar, could very easily happen to you.

I personally find this story very powerful and this legend very symbolic of the fact that in Gorkhali community, the woman have not only been equal, but also more stronger, more daring, more loving and caring than the men.

So here's to all the Sisters... THANK YOU FOR BEING YOURSELVES... 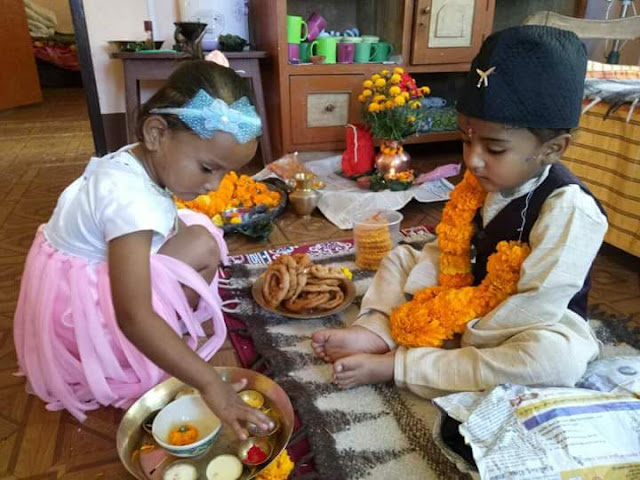