Seventy-six people are confirmed dead in chartered plane crash, which was carrying members of a Brazilian soccer club on the outskirts of Medellín, Colombia, the authorities said.

Five of the 81 people onboard survived the crash, according to Brig. Gen. José Gerardo Acevedo, the police commander for the area surrounding Medellín, news agencies reported.

The team was traveling from Bolivia to play in the final of the Copa Sudamericana tournament when the plane crashed about 10 p.m. on Monday.

The aircraft was carrying 72 passengers and nine crew members, according to a statement issued by the Medellín airport. The search was being hampered by low visibility and the rescue crews’ difficulty in reaching the site.

The authorities said the plane had reported electrical problems as it flew near the towns of La Ceja and La Unión in the mountainous stretches around Medellín.

We have posted some final pics taken by the Brazilian footballers as they made their way to a fairytale cup final before a plane crash that claimed 76 lives and left just five survivors.

Defender Alan Ruschel and goalkeeper Danilo Padilha from the top Brazilian side Chapecoense posed for a short video on board a passenger plane with Ruschel, 27, telling fans: 'We’re coming Colombia.'

But their journey from Brazil to the Colombian city of Medellin - ahead of the Copa Sudamerica final - came to a devastating end when a jet they were on crashed down in remote mountains. 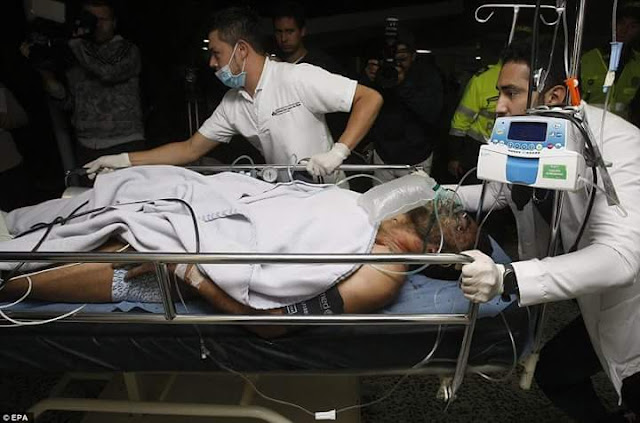