The Surat-based billionaire diamond merchant, Savji Dholakia, whose story became sensational after he made his son do blue-collar jobs to learn the value of money, is again in the news for doing something stunning. This time he has gifted 400 flats and 1,260 cars as Diwali bonus to his employees.

His diamond firm, Hare Krishna Exports, has spent Rs 51 crore on Diwali bonuses this year under which 1,716 employees have been named as the company’s best performers.

The offering of Diwali bonus has become a ritual for him since 2011 which he announced the rewards in an informal meeting.

Last year, Mr. Dholakia had gifted 491 cars and 200 flats to his employees. The year before that, he spent Rs 50 crore on performance incentives.

Mr. Dholakia hails from Dudhala village, in Amreli district of Gujarat. He grew and expanded his business after taking a loan from his uncle. After immense hard work and dedication, he has built his wealth. It was never an overnight affair.

A few months ago, Mr. Dholakia had sent his son Dravya to Kochi with three sets of clothing and Rs 7,000 emergency money, so that the young man could learn what’s it’s like. He wanted Dravya to understand life and how a commoner struggle to get a job and money. He believes that no university can teach these life skills except experience.

In most cases, we see there’s a big gap in income between the employer and the employees of a company. The initiative taken by Mr. Dholakia sets a brilliant example for other companies.

Updates: According to the latest update we found, the man has offered the Diwali gifts with EMIs. The company will contribute Rs.5,000 to loan instalments for five years; a major part will go from the employees’ salary.

The 400 flats of 1,100 square feet would be allotted in the company’s own housing scheme. The flats would come at Rs 15 lakh and the monthly instalment, which the employee will start paying after five years will be Rs. 11,000. 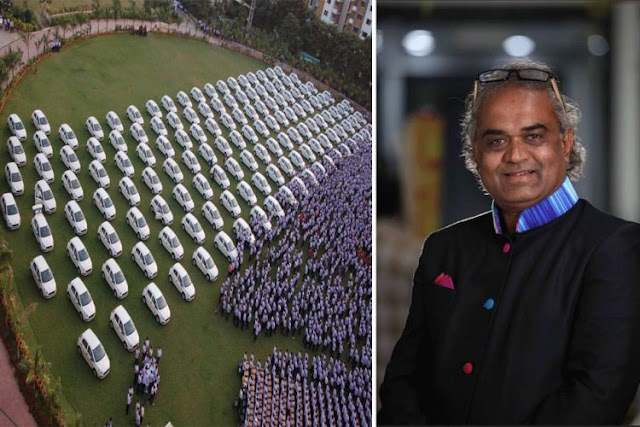