Siliguri boy Wriddhiman Saha Has Been A Revelation For The Side: Kohli

Describing wicketkeeper-batsman Wriddhiman Saha as a revelation for the Indian Test cricket side after it registered an empahtic win over New Zeland in the second Test here, captain Virat Kohli on Monday praised and called him the countrys best glovesman now.

“Saha is brilliant. He is the best keeper in the country right now. He is doing a great job in Test cricket,” Kohli said at the prize distribution ceremony after India decimated New Zealand by 197 runs.

Saha was adjudged the man of the match after he struck crucial unbeaten half centuries in both the innings on a difficult uneven bounce track in crunch situations, and was also a picture of confidence behind the wicket.

“He is wonderful behind the stumps, with the bat as well, something we wanted him to come good,” said Kohli.

Referring to Saha’s maiden Test ton in the Third Test against the West Indies at Gros Islet in August, Kohli said that innings boosted the Bengal cricketer’s confidence.

“That hundred in West Indies really helped his confidence. You can now see he wants to fight it out, he understands how to play with the tail, and he backs himself to go over the top and play his shots when under pressure. That’s key for him. He’s been a revelation for the side,” said the captain. 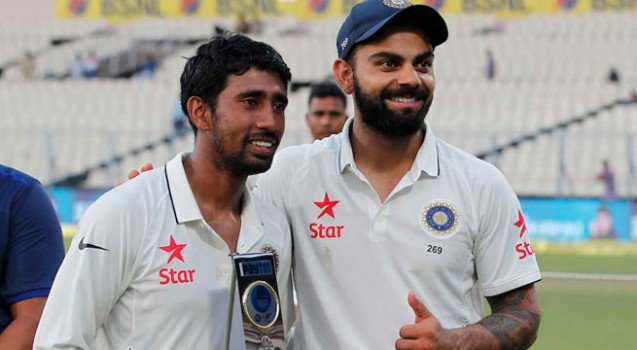