- October 04, 2016
Tourists visiting Sikkim will now be able to hire motorcycles as the transport department today introduced the rental service for the first time in the state. For those who cannot ride a bike or do not have a licence, drivers can also be hired. Today, transport secretary S.B.S Bhaduria launched the service with five 500cc Royal Enfield bikes belonging to BB Line Tours and Travels. "It is an innovative scheme to motivate tour operators and encourage traffic-free riding. We hope many people would apply for yellow registration plates (for two-wheelers)," Bhaduria said. Yellow number plates are meant for commercial vehicles, like taxis and trucks. Bhaduria said such rental services were available in Goa and Himachal Pradesh. Manager of BB Line Tours and Travels, Gelek Gyatso, said: "There are many budget tourists who travel solo or as a couple and they cannot afford to hire a vehicle. Hiring two-wheelers will not only give them freedom but will also reduce cost by almost 60 per cent. For example, one has to pay around Rs 18,000 for a North Sikkim tour (two days and three nights on SUVs). In a two-wheeler, it would cost less than half." Sources said more tour operators are likely to apply for the permit soon.
Gyatso said one had to pay a security deposit of Rs 10,000 to rent a bike. "The process is very easy. A tourist has to pay Rs 1,500 a day for a motorcycle. The security deposit is refundable. If there is any damage to the bike, the cost would be deducted from the deposit. One has to submit an original photo ID proof. We will promote the service on our website and Facebook page," he said. Riders have to pay for fuel. While domestic tourists need a driving licence, foreigners would need an international driving licence and an Inner Line Permit as well. The charges of a bike driver are yet to be fixed. Gyatso said a third-party insurance coverage would be provided to riders against Rs 300 per head (non-refundable). Sources said permits had to be taken if one wanted to go to Nathu-la, Chhangu Lake and Baba Mandir in East district and the tourist spots in North Sikkim. Special secretary of the tourism department, C.P. Dhakal, said the permission would be issued by the check-post office in Gangtok. Foreigners are not allowed at the tourist spots in the East. To get the licence, a tour operator, which has minimum five motorcycles, can apply to the motor vehicles department with bike documents, address proof, registration fees and the Sikkim subject certificate. "The service is under the Central Motor Vehicle Act. Scooty is not admissible under it. States like Goa and Himachal have paid two-wheeler services," Bhaduria said (Telegraph) 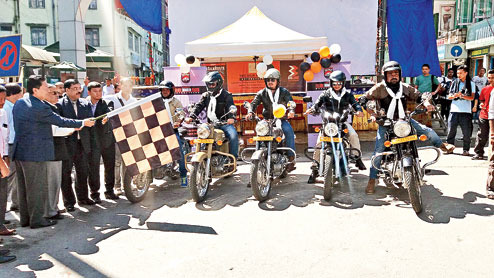