- October 27, 2016
Union Home Minister Rajnath Singh is scheduled to arrive in Gangtok on November 9 on a three-day visit to Sikkim, according to official sources. The Home Minister would be accompanied by four Union Ministers – Minister of State (MoS) for Home Kiren Rijuju, MoS Parliamentary Affairs Mukhtar Abbas Naqvi, MoS Agriculture SS Ahluwalia and MoS Home Hansraj Gangaram Ahir. Singh would be attending two crucial meetings here on November 10. The first meeting would be a review meeting on Indo-China border affairs and would be attended by representative of the States which share border with China. The second meeting is the consultative meeting of the Home Ministry to review the security situation in North Eastern States. Chief Ministers of several States including Himachal Pradesh (Virbhadra Singh), Uttarkhand (Harish Rawat), Jammu and Kashmir (Mehbuba Mufti) and Arunachal Pradesh (Pema Khandu) besides members of Parliamentary Committee on Border are also expected to attend the meeting. Meanwhile, Sikkim Chief Minister Pawan Chamling called on Union Home Minister Rajnath Singh this evening at his official residence at New Delhi. Official sources said Chamling also apprised the Home Minister about the socio-political situation prevailing in Sikkim. During the meeting, he sought an early resolution of the issues relating to reservation of seats for the Limboo-Tamang communities of Sikkim, who were declared as STs in 2003, in the Assembly. He also requested Rajnath Singh for an early declaration of the ‘left out’ communities of Sikkim as STs. Singh promised that the issues would be looked into sympathetically. Chamling also requested the Home Minister to allow the 17th Gyalwa Karmapa, Ogyen Thrinely Dorje to come to Sikkim at the earliest. 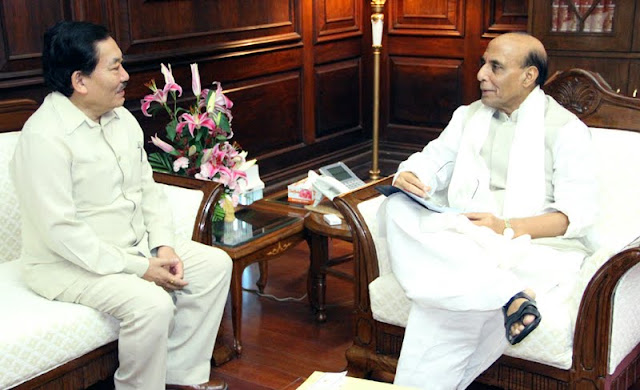