Students of Dolna Kindergarten School, all between six and 11 years, distributed their Puja clothes among 200-odd children of the same age group belonging to poor families.

Katha Sen, a Class III student, said she and her friends came up with the idea after a school picnic.

"In January, we had gone for a picnic. We were all wearing sweaters and jackets to beat the cold. But we met few children who were wearing tattered clothes. They helped us fetch water and also cleaned up the area. We made fiends with them and they told us not all of them went to school," she said. "They also said their parents couldn't buy them woollens."

After returning home, the girl asked her parents why some people couldn't afford clothes. "I was told they were from very poor families," she said.

It was then that Katha came up with the idea. "Every year, we get three-four sets of new clothes from our elders for Durga Puja. Me and my friends decided that we will give away one set to children from poor families," the girl said.

She and her friends spoke to some senior students and later approached the principal.

"The moment the students told me about their plan, I felt very proud. I contacted our MLA Mohit Sengupta and requested him to ask the local councillors to gather poor children from each ward and bring them to the school," Dolna principal Srabani Dey said.

Chandni Paswan, 8, who got new clothes today, said: "My father works in a garage. I didn't have new clothes till today. I am happy and excited."

Ramesh Chouhan, 11, said he had been waiting for a pair of jeans from his father. "Today, I got one, along with a shirt. I am eager to wear them and go pandal-hopping." 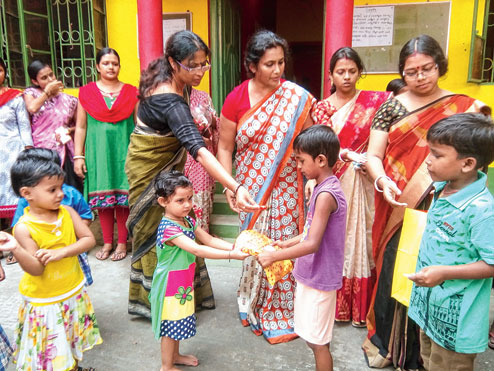