Minister Gautam Deb drove into Chowrasta for a cup of tea, prompting a local youth to point out at the vehicle restriction in the area and "request" him not to bring his car there.

Deb assured the youth that the incident would not be repeated but added that Bimal Gurung should also be told not to bring his car to Chowrasta.

"I was not aware of it (vehicle restriction). A man came and pointed out the issue and I told him that I appreciated his concern and this would not happen (again). In fact, I love to walk. This happened as I was not aware (of the restriction). Otherwise, there is no problem in walking a distance of two minutes," Deb said.

The roads leading to the Mall usually have barricades that prohibit vehicles. This morning, however, the barricades had been removed for a run, police said.

In the past, chief minister Mamata Banerjee's car has gone about 10 meters inside the square, near the statue of poet Bhanubhakta Acharya. Gorkha Janmukti Morcha chief Bimal Gurung's convoy has also gone up to that point. But normally cars are not parked at the Mall. Yesterday at 11.45 am, Deb's SUV went about 30 meters into the Mall. The car was parked for about 20 minutes, sources said. His escort vehicle, however, didn't go to the Mall.

"I was on my way to the church and had about half-an-hour at hand. I decided to go to Golden Tips, a tea parlour, for a cup of tea. I was surprised to see a government vehicle parked in front of the shop. I was told a minister had come. I did not feel nice," Biplav Rai said.

He then walked up to the tourism minister. "I told him that I had a request and he should not get offended by it. I told him it was not proper to drive a vehicle to Chowrasta and it is not something that the local people like," Rai said later.

A person who was with the minister quoted Deb telling Rai: "I respect local sentiments. This will not happen again. You should also tell this to Bimal Gurung."

Asked about Deb's comment, Rai said: "My intention is not to create a controversy. I just pointed out something because I felt it was not right. I am no intermediary of the two important people."

The Mall is a no-car zone and even bikers get off and drag their vehicles to cross it.

A senior police officer said the minister's envoy would be informed about the vehicle restrictions at the Mall.

Asked about the missing barricades, a police officer said: "It is always there. The road was not cleared for the minister. Today, the barricade was removed as the Rotary Club of Darjeeling had organised a run. It seems the driver, probably from the plains, found the road clear and drove in."

The 21km run continued till about 11am.

Today, Deb spoke at a public meeting at Bijanbari and attended a Gandhi Jayanti programme at Southfield College.

At 2pm, Gurung visited a pandal at Chowrasta. By then, the barricades were back.

The Gorkha Janmukti Vidyarthi Morcha lifted its relay hunger strike that entered its 40th day today. "The decision was taken keeping the situation of the border areas in mind. Darjeeling MP S.S Ahluwalia had made a request to postpone the strike," said the front vice-president, Bhaskar Rai. 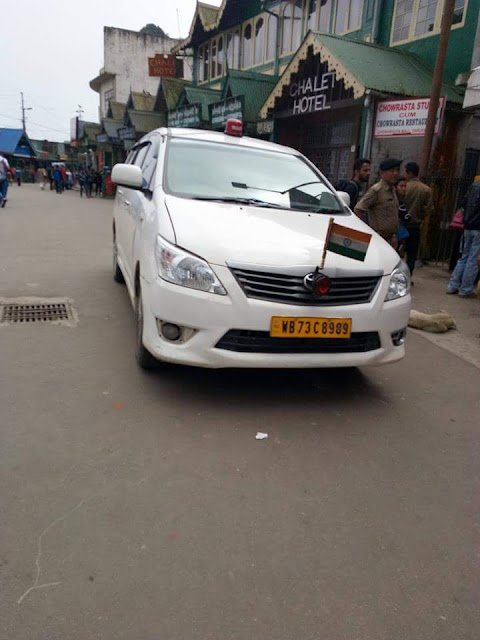