Four members of a club at Lataguri which had allegedly sought exorbitant puja chanda (Rs 15000 according to earlier report) from director Arindam Sil surrendered before police yesterday and were subsequently granted bail by a court.

The quartet from Netaji Club O Pathagar surrendered before Kranti outpost under Malbazar police station yesterday. Today, they were produced in the chief judicial magistrate's court here and granted bail.

The four were charged under sections 147 (rioting), 148 (rioting, armed with deadly weapon), 149 (every member of unlawful assembly guilty of offence committed in prosecution of common object), 354 (A) (sexual harassment), 384 (extortion), 448 (house trespass) and 506 (criminal intimidation) of the IPC.

Sil had filed a complaint with Kranti police outpost on September 27, alleging that members of a club had sought a high amount as puja subscription in a forceful manner. The director had been staying at a private resort at Lataguri on the fringes of Gorumara National Park, 30km from here, for shooting a film.

The film is based on detective character Byomkesh Bakshi whose role is played by actor Abir Chatterjee. The director has already left for Calcutta after the shooting.

Sil didn't name the club or any of its members in the complaint.

"Our clients had surrendered as police were in search of them in connection with a complaint filed by Arindam Sil. Yesterday, they were produced in a court here. We appealed for bail and argued that they had not extorted money from the complainant and there was no evidence to show that they had forced or intimidated him for puja subscription. The court has granted bail," Sandip Dutta, the lawyer representing the club members, said.

The four are Sudip Bala, an executive committee member of the club, and Snehasish Dey, Sanjoy Pal and Uttam Raha. All the four are residents of Lataguri.

Abhijit Sarkar, the government lawyer, said: "I had objected to the bail petition. It seems as there was no substantial proof that they had attempted extortion, the court granted them bail."

The police checked the CCTV footage of the tourist resort where Sil and other members of the film unit had stayed. From the footage, the police could identify some members of the club who had called on Sil at the resort. Raids were also conducted at the homes of some club members.

Amitabha Maiti, the superintendent of police, Jalpaiguri, said the club wouldn't be allowed to hold puja this year.

"We will not let any club resort to extortion in the name of Durga Puja subscription. A complaint has been filed against a club. We are also checking the CCTV footage of the resort where some club members had gone to collect the money (from the director). No permission will be granted to the club and if it goes ahead and organises the puja, we will take proper steps," said Maiti.

Yesterday, residents of Lataguri, including students, housewives and traders, took out a demonstration and burnt the effigy of Sil. Shops were also shut. "Several film units come here for shooting but no such complaint of extortion had ever been filed against any resident of Lataguri or club before," said Manik Sarkar, the secretary of Lataguri Byabsayee Samiti. 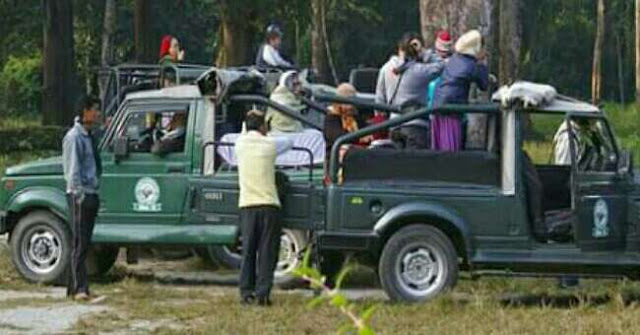