GOD HAS A TAIL, AND IT WAGS - Happy Kukur Tihar to Our Best Friends

As we gear up for Deepavali, there is a section of people who are preparing for the festival to celebrate dogs today (on October 29).

Nitish Saboo, a software-engineer in Bengaluru, was residing in Nepal for fifteen years. He vaguely remembers his landowner putting red tikka and garland on his dogs prior to Deepavali.

Even in northern parts of India like Darjeeling, Sikkim and Assam, the Gorkhas or Nepali-Hindus traditionally practice the worshipping of dogs on the second day of Deepavali. The festival of lights is regionally called Tihar and is celebrated for five days.

The first day is observed as a day to worship crows and ravens, this is done to avert bad omens. On the second day, dogs are worshipped because their importance has proven to be paramount in Hindu texts.

Rigveda, oldest of the Vedas suggest that Samara, who is the mother of the dogs, helped the god of heaven Indra to retrieve stolen cattle. Dogs are also believed to be guardians of death and after life.

“We are animal lovers, we have been practising this tradition of worshipping dogs for ages and we do so to thank the animal that is so loyal and faithful,” said Jiwan Gurung, from Darjeeling, who has an Indian dog
at home.

“It is not just the pet dogs that are worshipped on this day, even street dogs are. We make spare garlands and food for strays in the locality,” Gurung added.

Despite having quite a few number of Gorkha or Nepali-Hindus in Bengaluru, Kukur Tihar, as the festival is called, is not celebrated in the cities. “I do have a dog here but we don't celebrate it here,” said Rahul Rai, president of Nepal India Association in Bangalore. “The festival is only celebrated back home.” A marigold garland is weaved by the community to be draped around the neck of dogs.

A tikka, prepared using rice, yoghurt and red dye powder,  is made to be applied on the forehead of dogs to mark the puja. The food is prepared separately for dogs on the day. From milk and eggs to meat, large quantities are served for the four-legged companions.
On the third, fourth and fifth day of Tihar, cows, oxens and siblings are celebrated respectively. 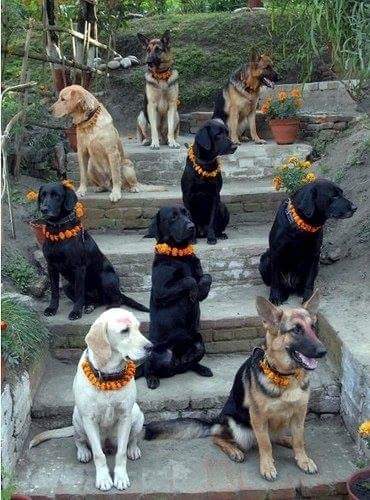 ABCPUPPY said…
You have worked nicely with your insights that make our work easy. The information you have provided is really factual and significant for us. Keep sharing these types of articles, Thank you. Maltipoo puppies for sale in Texas
15 November 2021 at 00:28

talisus said…
A very delightful article that you have shared here.online dog supplies Your blog is a valuable and engaging article for us, and also I will share it with my companions who need this info. Thankful to you for sharing an article like this.
9 April 2022 at 16:32

KLW Business Ventures, LLC said…
I value your endeavors which you have placed into this article. Truly it is a valuable article to build our insight. Gratitude for share an article like this.Official Certificate Of ESA Registration
22 September 2022 at 10:15