Roshni discovered a love for running while in the middle of a heartbreak in 2003. Now she trains other runners and facilitates their entry into marathons. Her dream is for one of her team members to win an Olympic medal for India.

Nearing the end of a gruelling running session, as she entered the stadium for the final leg, it was her parents who handed over the Indian flag to her.

She ran the last 200m of the 89 km long Comrades Marathon, shouting with all her might, “Jai Gorkha! Jai Hind!” This would become the motto of the foundation close to her heart: Run with Roshni.

Born in Pedong, in the Kalimpong district of Darjeeling, whenever Roshni would tell people that her mother tongue was Nepalese, people assumed that she was from Nepal. This identity crisis, she knew, was shared by many Gorkhas. Due to the annexation of some territories of Nepal into India by the British in the 19thcentury, as well as the friendship treaty with Nepal in the last century, “people often mistake us to be migrants,” she said. “ But our ancestors were born in India and we can’t change our mother tongue,” Roshni added. As a proud Indian, she wanted to increase awareness about Gorkhas in India and help her fellow community members deal with their identity in their own motherland.

It was at the ‘Self Expression and Leadership Programme’ by Landmark Education that she initiated the idea of using marathons to help underprivileged Gorkha kids come into the mainstream.

“Running is very close to my heart. To make some difference in my community, I thought of starting the Run with Roshni project, through which we could highlight the issues our community was facing,” she said.

But running wasn’t always Roshni’s hobby. It was only in 2003, when going through a heartbreak, that Roshni got up one fine morning and went for a run without giving it too much thought.

The experience helped Roshni beat her depression and fall in love with running. She moved to Mumbai in 2004 to pursue a Master’s degree in law, but her interest in running did not decline. She finally participated in the Mumbai Half-Marathon in January 2007 but, being unprepared physically, she was bedridden for the next 10 days. It was only later, when she started working as a legal executive at Colgate, that she met her coach Daniel Vaz and started to prepare for running more systematically.

Since then, Roshni has participated in several marathons, including Prague International Marathon (2010), Comrades Marathon (2012), Maidenhead Half Marathon (2013), London Run to Beat (2014), and Tenzing Hillary Everest Half Marathon (2016). In 2015, she successfully completed Bangalore Ultra Marathon (100 kms), her longest distance.

Run with Roshni started shaping up in August 2011.

“In the initial stage, getting runners was a challenge for me and the second challenge was getting funds for them. But thankfully, through Facebook, I was able to contact many people who don’t know me personally but have read about Run with Roshni Foundation; they are helping me out with the money,” she says.

Roshni now holds the Kalimpong Marathon every year to select six top runners (boys and girls) who then participate in the Mumbai marathon.

Roshni with some of the runners she has helped train

“Darjeeling and Kalimpong are the perfect altitude for producing good runners,” she says. Although she considers training crucial, she believes that these runners have a natural talent, which needs a little honing. Her coach helps her by devising a training module, which she passes on to the team.

The Foundation has supported over 30 runners who have participated in close to 14 different marathons with the help of charity bibs and sponsorships. For the Hyderabad Marathon 2013, her team’s runners had to walk 75 kms to reach the railway station due to a strike in Darjeeling. On hearing of this, Nike supported the runners by gifting shoes to all the 15 members. Some of her runners have now been recruited by the Indian Army.

Roshni was also part of a Mumbai Runner Girls group but a busy schedule means she now concentrates on her Foundation more. Leaving her job in 2014, Roshni wrote her autobiography From Mountains to the Ocean, detailing her journey and experiences and sharing the vision of her Foundation.

Roshni believes, “Anyone at any age and weight can pick up running…give yourself some time and be consistent with the training.”

Runners of all ages

She recalls that in 2013, after running the 89 km marathon in the previous year, she considered the 21 km run at Maidenhead marathon a holiday until an older lady around the 14 km mark was about to overtake her. It was at that moment, she says, that she was inspired by the passion of this older woman and decided that she, a 33-year-old, wouldn’t let a lady twice her age go past her.

“She really inspired me and I thought at the age of 65 even I would want to run strong like her.”

Mumbai International Marathon is a big event for Run with Roshni, for the certification it provides as an international marathon. In the future, Roshni wants her team members to gain exposure, training and eventually win an Olympic medal. She says that the Gorkhas in the army, as the first line of defence, have sacrificed a number of their sons; now is the time for Gorkhas to have the national flag on their shoulders rather than on their chests.

As she gave this interview to TBI, Roshni was preparing for yet another marathon with her team members and, waiting for her in the reception area, was a friend who had arranged six pairs of shoes for the members.

If you would like to contribute towards the Run for Roshni Foundation, please get in touch with Roshni Rai at runwithroshni@gmail.com or check out her Facebook page for more. 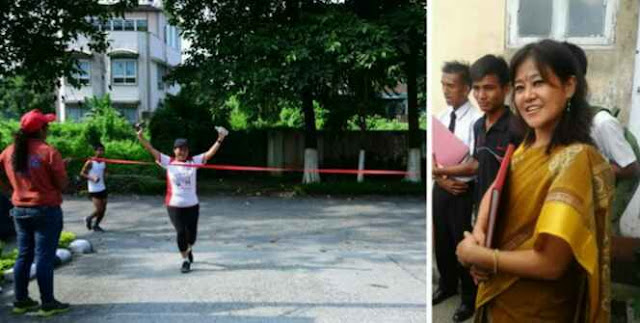