The five-day Durga Puja festival came to an end today with the immersion of idols as the goddess left for her abode in Kailash at the end of her annual sojourn on earth.

Women held ‘sindoor khela’ ritual smearing vermilion on each other’s faces. They also offered sweets and prayers to Goddess Durga, who is regarded as the daughter, and her family, while the young swayed merrily to the rhythmic beats of ‘dhaks’ (drums).

People exchanged greetings with each other on the occasion of ‘Bijoya Dashami’.

Elaborate security arrangements have been drawn up by Siliguri Police to ensure safety and security and maintain peace and harmony during the immersion.

According to Siliguri Police, several idols were immersed today till 6 PM without any untoward incident reported from anywhere.

As the time fixed for Dashami puja of the Goddess and her celestial family ended before noon, organisers of the majority household and many community pujas began immersion of idols at different ghats of the Mahananda and other rivers and water bodies throughout the state.

Most of the household Durga idols were immersed under Siliguri Police jurisdiction since noon amidst the chanting of “aasche bochchor abar hobe” (Pujas again next year).

Besides police, personnel from civic bodies assisted in the immersion process while speed boats of Indian Navy kept a watch.

Calcutta High Court had earlier directed that immersion of household Durga Pujas could be held in West Bengal till 6 PM today. However, for community pujas the deadline for immersion was 4 PM as it is a day before Muharram. 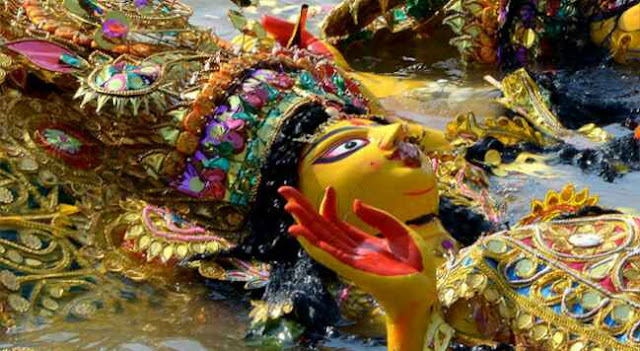