- October 04, 2016
The state government yesterday initiated the process of handing over land for installation of Instrumental Landing System at Bagdogra by giving the Airports Authority of India a plot measuring 1.18 acres.
This was the most critical piece of land that had stopped the installation of ILS as it was owned by five families, unlike the remaining piece of land which is with the state and vacant right now.
At an event in Matigara yesterday, state transport minister Subhendu Adhikari, in the presence of his cabinet colleagues Gautam Deb, Rabindranath Ghosh, Binoy Krishna Burman and James Kujur, handed over the documents of the land to Rakesh Sahay, the airport director of Bagdogra.
"We have handed over the plot of 1.18 acres to the AAI. We expect them to install the ILS at the earliest in Bagdogra airport," Adhikari said.
Sources in the Darjeeling district administration said although it might appear that a small piece of land - vis-à-vis the total requirement of 24.16 acres mentioned by the AAI for ILS installation - has been handed over today, but it is the most critical piece of the entire land.
"Out of the entire plot, only this portion was owned by five families.... First of all, the families refused the compensation that was offered to them. Later, their demands were heard and it was decided that the north Bengal development department will buy the land from them. Discussions with these families continued and as they accepted the price finalised by the state, the legal heirs of these families were identified," an administrative official said.
"Last month, the department handed over the cheques to them. They were asked to vacate the land. Meanwhile, NBDD (north Bengal development department) transferred the land to the state transport department and finally, it could be handed over to the AAI today," the official said.
Airport director Sahay said: "We had sought land for ILS back in 2009. Finally, the ball seems to be rolling as we were handed over that portion of the land that was privately owned. The remaining land is owned by the state and vacant."
The ILS in Bagdogra would be installed by the Indian Air Force that maintains the runway and the Air Traffic Control at the airport.
Telegraph 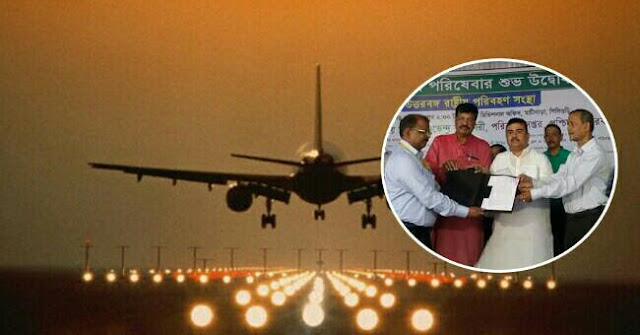