The north Bengal tourism industry expressed concern over Bimal Gurung's threat to call a shutdown in the hills next week, saying people who had made bookings for the pre-Puja season were calling up and asking about the political situation.

The Gorkha Janmukti Morcha chief had yesterday threatened to call a strike on September 28 if the chief minister did not provide details of the Rs 4,000 crore she had claimed to have given the party-run GTA. Hours later, Mamata Banerjee had said "there will be no shutdown".

"Although the strike hasn't been announced yet, certain comments by leaders of different political parties over the past two-three days have left our clients worried. There have been no cancellations but people are calling us and enquiring about the situation. Thousands of people from across the country are scheduled to visit the hills in the festive season," said Samrat Sanyal, the executive president of the Eastern Himalaya Travel and Tour Operators' Association.

"There are a lot of questions over the uncertainty in the political situation. We are concerned and keeping our fingers crossed," he added.

According to Sanyal, the flow of tourists will start next week.

"There are several group bookings at the end of this month. Now, if the strike happens, it would surely affect the industry, that too at the beginning of the festive season."

The festive season in Darjeeling begins a few days ahead of the Pujas and continues till the New Year.

While threatening to call the strike, Gurung had also advised tourists to "check the situation in the hills" before making travel plans.

A hotel owner in Darjeeling sounded perturbed. "We get the highest footfall during the summer and Puja seasons. This summer, there was no political tension in the hills and thousands of tourists had turned up. But if the Puja season is affected, our income for the whole year will go down," he said.

A tour operator said the "peace in the hills" had helped attract tourists from across the world over the past four to five years. "When the Gorkhaland movement had resumed in the hills, the tourism industry had suffered a huge setback. It has taken four to five years to win back the confidence of tourists. Now, if there are strikes and demonstrations again, Darjeeling's image would suffer," the hotel owner said.

The worries deepened today after Trinamul leaders threatened to hit the streets to foil any strike called by the Morcha.

Aroop Biswas, the Trinamul observer for Darjeeling district, held a meeting with party workers at Graham's Home Ground in Kalimpong, where around 2,000 Morcha activists crossed over to the state's ruling party.

Biswas handed them party flags as he welcomed them to the Trinamul fold. Among those who joined Trinamul today were Jiten Tamang, a central committee member of the Morcha and president of the party in the Bijanbari area.

On the Morcha strike threat, Biswas said "all necessary efforts would be made to foil a bandh, if any". 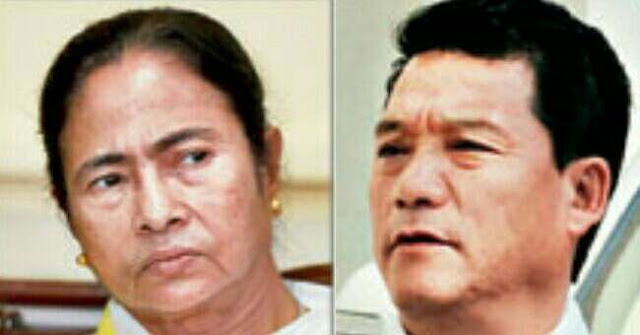