Two taxi drivers from Sikkim were arrested yesterday as they were about to dump the body of a youth they had allegedly stabbed at Ninth Mile near Sevoke.

Police said another person who was involved in the murder has fled.

The deceased and the youth who had fled were also taxi drivers and all the four were going to Siliguri from Singtam in a WagonR.

The car bearing a Sikkim registration number plate has been seized. The car seats had blood stains, sources said.

"Two persons have been arrested and a car has been seized in connection with a murder. Investigations are in progress," Loganayagi Divya V, the subdivisional police officer of Kurseong, said.

The deceased, Dipen Tamang, 25, was from Chandmari in Chhota Singtam area of East district in Sikkim. The arrested youths, Amit Chhetri and Suraj Rai, are residents of the same locality.

"Early this morning, they were travelling towards Siliguri from Singtam in the WagonR. Dipen was driving and three others, including Amit and Suraj, were in the car. They stopped the vehicle at Ninth Mile, which is a forest area near Sevoke. They had an argument there, following which, Dipen was stabbed and he died on the spot," an officer of Darjeeling district police said.

The police said Amit and Suraj had taken the body out of the car. "They walked into the forest (Mahananda Wildlife Sanctuary) to dump it. Some forest guards on patrolling saw them. They asked them to stop but the duo tried to escape. Both were caught by the guards and we were informed. The third person, who was in the car, fled. We are trying to locate him," the police officer said.

The duo were produced in the additional chief judicial magistrate's court in Kurseong this afternoon. They have been remanded in police custody for two days.

The vehicle was taken to Bhaktinagar police station in Siliguri by the police.

Sources at Gangtok police station said they had received information that a car belonging to a resident of Chandmari had been recovered near Sevoke. "We could not find the person. Tomorrow, we will take up the probe again," an officer in Gangtok said. 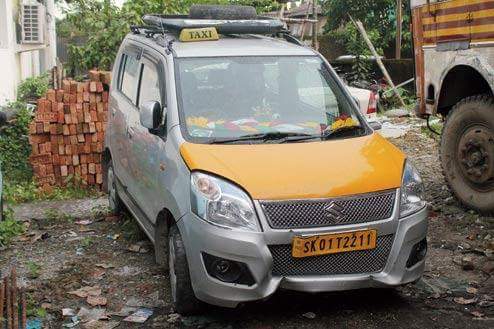