- September 12, 2016
The Gorkha Janmukti Morcha has filed an FIR with the Kalimpong Police Station, with copies to SDPO and ASP Kalimpong against a very provocative and racially charged posted pasted in its name in Kalimpong today.
The FIR [a text of which is posted below] states
"With due modesty, I on behalf of Gorkha Janamukti Morcha, Kalimpong seek to state the following for favour of your kind information and necessary action.
That, to the utter surprise of all of us in Kalimpong this morning a very provocative and objectionable poster appeared in the CK Chowk premises one of the busiest business point in Kalimpong.
That, the content of the poster is totally contrary to the plan and policies of GJMM and its leader Shriman Bimal Gurung be it during agitation or in running the GTA since inception in the year 2007.
That, the intention of the unidentified outfit whoever pasted the poster in just to malign GJMM leadership, derail the democratic Gandhian way of association proposed by GJMM to achieve the long drawn demand of Statehood but above this is to destroy the long cherished harmony of fellow feeling among all the communities living in the beautiful hills of Kalimpong.
As there is no evidence of breach of communal harmony during any form of movement launched by the Gorkhas in the hills, the said poster should be taken with utmost seriousness keeping in view the implication it can have in this volatile situation.
As such we Party in power strongly demand a forensic investigation of the poster, a thorough search of the culprits and evade the possible eventuality. Moreover GJMM assure the administration that the party shall always co-operate with all responsible agencies to maintain complete peace and harmony in the region and stand one in dealing with such unacceptable acts in our civilized society
We expect a quick action from both civil and police department to bring such culprits before the judiciary so that the different respected minority communities feel as same as ever and continue to have faith in GJMM leadership."
Corresponding with TheDC, Mr. Binoy Tamang GJM Spokersperson stated from Delhi, 'this poster is an indication of how desperate certain groups are to stoop this low to create disunity in the hills... the poster is an attempt to not only malign GJM but to also create divisions in the hills and every hill loving individual, social and political groups should remain vigilant and protest against such attempts at communalizing the Gorkha unity..."
He added, "on behalf of our party Kumar Chamling,General  Secretary, GJM, Kalimpong Sub-division has filed an FIR and we demand that the police and administration must conduct a forensic test, find the perpetrators and bring them to justice at the earliest... we strongly condemn such vested moves aimed creating communal tension.... GJM will never tolerate such politically motivated attempts at creating communal tension as well as attempts at derailing the Gorkhaland movement "
Reacting to the poster, a Kalimpong resident stated, "पोस्टरमा जुन लेखाइ छ त्यो गोजमुमोको भाषा शैली हुँदै होइन भन्छ पोस्टर पढ्नेहरुले... यो सबैलाई विविध नै छ नगरपालिका चुनाव अाउदैछ,गोर्खा जनमुक्ति मोर्चालाई बदनाम गर्ने कुप्रयास हो।"
[Pic: copy of the provocative poster pasted today in Kalimpong] 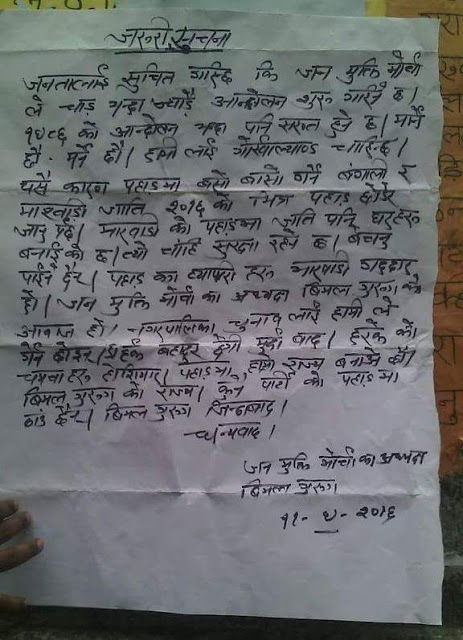