Over 2000 Left Supporters Protest Against Alleged Economic Blockade in Siliguri

- September 22, 2016
Siliguri mayor Asok Bhattacharya yesterday hit the streets leading 2,000-odd CPM supporters, district leaders and councillors, and held a rally in protest of the alleged "economic blockade" by the Trinamul government.
Bhattacharya, who had spoken with mediapersons in Calcutta and elaborated how the state government was depriving the local bodies like the Siliguri Municipal Corporation of funds, walked up to the subdivisional officer's office and submitted a memorandum, demanding immediate release of funds.
"We have come down to the streets as the state government is not sanctioning funds to us. I have spoken to state finance minister who has told me that he would look into the issue. In total, the civic body here is entitled to receive around Rs 100 crore from the state government and from its different departments and agencies," the mayor said.
Trinamul councillors at SMC, who held a meeting, said they would launch an extensive campaign across the city to make people aware of how the civic board had failed to provide basic services.
Telegraph, Pic: Kundan Yolmo 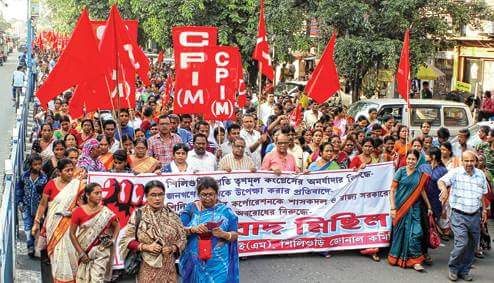