- September 29, 2016
Gorkha Janmukti Morcha chief Bimal Gurung said his party would not call any more bandhs in the Darjeeling hills during the festive season, calling today's shutdown a success but unwittingly accepting that such disruptions in the peak tourist season could backfire. Erik Sorensen from Denmark and other tourists in the toy train in Darjeeling on Wednesday. The Darjeeling-Ghum-Darjeeling toy train ran unhindered with police protection. More than 100 tourists took the four rides on Wednesday. Picture by Suman Tamang "It was a 12-hour bandh and there is no need to extend it. The tourist season and the Pujas are approaching, and schools have to hold examinations. Keeping all these in mind, I see no reason to call another bandh. There will be no bandh," Gurung said in Kalimpong. He had earlier threatened to extend the shutdown if the administration tried to foil it. Roads remained empty, most shops did not open, few students went to schools and colleges and the attendance of tea workers was low. Some near-empty North Bengal State Transport Corporation buses ran. The government said the bandh had had a partial impact and asserted that cars stayed off the roads and business establishments remained closed because of "fear" of the Morcha. Three ministers camped in the hills to oversee the government's efforts to foil the bandh and one of them said the people's "opposition" to the shutdown could mark the beginning of the "end of the dictatorship" in the hills. As promised, the government tried to ensure normality by detaining over 300 people, including Morcha leaders, for forcibly enforcing the shutdown, removing pickets, achieving at least 97 per cent attendance in its offices and keeping ration shops open. The Darjeeling-Ghum-Darjeeling toy train, monitored by the railways, ran with police protection. Tourism minister Gautam Deb said the ruling party would take out a "thanksgiving rally" in the hills tomorrow to acknowledge the "people's opposition" to the bandh.
Although Morcha leaders claimed success, with general secretary Roshan Giri saying the people of the hills were with the party, sources in the outfit said Gurung had done a balancing act by making it clear that there would be no more bandhs in the festive season. They said the leadership had realised that more bandhs in the peak tourist season could backfire on the party. "Having called a strike, he (Gurung) did not back off as it would have caused a face loss. But he realised there could be a backlash if he threatened more bandhs during the festive season as it would affect the livelihood of the people of the hills," a Morcha leader said. "As it is, the support base of the Morcha has shrunk, with Trinamul making inroads into the hills. So, Gurung decided against doing anything that could further alienate the party from the people," he added. The government, on the other hand, feels it has succeeded in keeping a semblance of normality by ensuring almost full attendance in its offices. "We believe the police did a good job by not allowing any Morcha pickets - something that has not happened in the past. We ensured 97 to 100 per cent attendance in our offices," Deb said. "In the foothills, the situation was normal. We consider that a huge success. Fear psychosis kept people away from their shops and establishments. The Morcha cannot take credit for that," he added. Deb referred to the importance of tourism to the hill economy - around 30 per cent of the region's population is directly or indirectly associated with the industry. "The bandh was against the people of the hills. To call a bandh when tourists visit the hills is to hurt the brothers and sisters of the region who depend on tourism.... In all these years, the hills have been dominated by a single party. We are hopeful this will be the beginning of the end of the dictatorship in the hills," he said. While minister Deb camped in Kalimpong, his cabinet colleagues Rabindranath Ghosh and James Kujur were in Kurseong and Darjeeling, respectively.
Across the hills, the police detained 304 people for trying to enforce the bandh forcibly. Jawed Shamim, the director, economic offences, who was in Darjeeling today, said the police had ensured there was no picketing in the town. The windscreens of three vehicles were smashed in Kalimpong by suspected bandh supporters. In Darjeeling, a group of tourists took the toy train ride under police protection. Erik Sorensen, a tourist from Denmark who has come with an 18-member Danish group, said: "I do not know what will happen, but I am enjoying it. Everything is fine till now." The group had faced a strike in Nepal too. For Sander van Winden and his wife Getty, who are riding a motorbike from the Netherlands to Indonesia, the shutdown was a new experience. "Yesterday, the roads were full of vehicles. Today, they are full of people. In our country, there are strikes by, say, an airline company, but not a complete shutdown of the town like this. It costs money to close shops," Winden said. 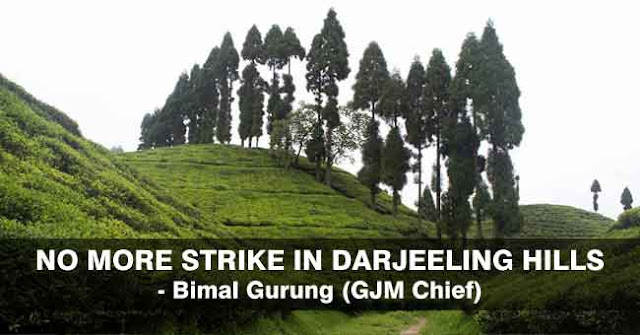