No Durga Puja in this Bengal Village since 4 years

Locals claim that few Muslim families residing in the Hindu-dominated village have been raising objections as far as the Durga Puja celebrations are concerned. “This is happening for fourth time in a row. The district administration fear that the 25 Muslim families residing in the village might get angered and bring the situation to a boil, hence they are denying us the permission to hold the Durga Puja,” said a villager, requesting anonymity.

The Superintendent of Police, Birbhum district, Sudheer Kumar Neelakantam could not be reached for a comment. However, a senior police official said, “The village has a history of several communal tensions. The only reason why the permission is being denied to hold the Durga Puja is to maintain law and order and prevent any incidents of communal flair up.”

Like every year, the organisers, Kanglapahari Durga Mandir Committee members reached out to the District Magistrate, Superintendent of Police, Sub-Divisional Officer and Sub-Divisional Police Officer requesting permission to hold the Durga Puja, but to no avail. However, the locals have moved the High Court demanding the right to celebrate Durga Puja. A hearing is scheduled for today.

Via: DNA, Pic shows: Half-done idols lie at a temporary mud structure in the village of Kanglapahadi in West Bengal's Birbhum district. 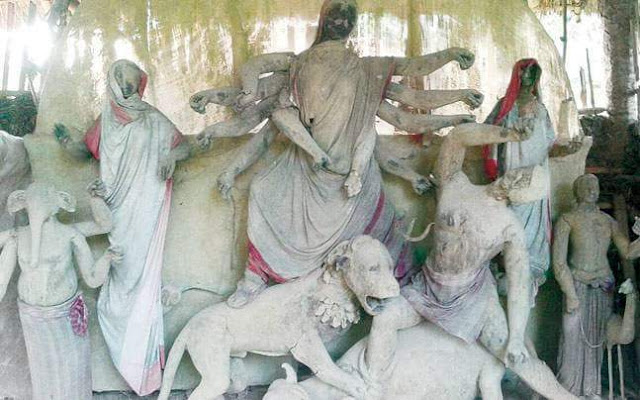