The Gorkha Janmukti Morcha yesterday "requested" the Trinamul Congress and the GNLF to stay away from confrontation during the 12-hour bandh on Wednesday, but the ruling party announced that three ministers would be in the hills on that day "to supervise the situation".

The Morcha called the dawn-to-dusk shutdown in the Darjeeling hills on Wednesday to protest the allegedly false claim of Mamata Banerjee that Rs 4,000 crore had been given to the GTA. The chief minister had already announced that she wouldn't allow bandh in the hills.

Binay Tamang, the assistant general secretary of the Morcha, held a press conference here yesterday and appealed to Trinamul and the GNLF not to confront the strike.

"The strike is a protest against the domination of the Bengal government. Mamata Banerjee and Aroop Biswas came to the hills, instigated the people and left, leaving the hill residents here. They will not be here during the strike and we request local leaders and cadres of Trinamul and GNLF not to confront the bandh as we are not against our own people," said Tamang.

Tamang also asked the GNLF to cancel its public meeting on the strike day. "We appeal to them to postpone the meeting to any other day so that there is no confrontation that day."

The GNLF's student wing is scheduled to hold a meeting in Darjeeling on Wednesday.

The Morcha leader said the administration was holding meetings with businessmen and transport operators and taking their phone numbers.

"Holding rallies, demonstrations and burning effigies are part of a democratic movement. But if the administration tries to force open shops, the situation could flare up not just in the hills but across north Bengal and we request the administration to handle the situation calmly and in an unbiased manner," said Tamang, who also requested vehicles from Sikkim not to operate within the GTA area on Wednesday.

Within hours, N.B. Khawash, the spokesman for Trinamul (hills), said three ministers would be stationed in the hills on the strike day.

"Three Trinamul ministers will be coming to the hills. They will probably reach tomorrow. They will be in the hills during the strike day to supervise the situation," he said.

While tourism minister Gautam Deb will be in Kalimpong, north Bengal development minister Rabindranath Ghosh will camp in Kurseong. Tribal minister James Kujur will be in Darjeeling.

Ghosh said: "Three ministers from the state cabinet will be camping in the hills basically to instill confidence in people's mind and help them in all possible manners."

Deb said the strike was "uncalled for" and would not be accepted by the hill people. "The strike has been thrust on the common people at the start of tourism season," said Deb.

Khawash said Trinamul would appeal to the people through the public address system not to take part in the strike and make them aware of the situation. "We are positive that the people will respond to our appeal."

Even though the Morcha decided to call a strike at the start of the tourism season, the party-controlled GTA will hold World Tourism Day celebrations in Darjeeling and Kalimpong tomorrow. The GTA has, however, cancelled its programme in Mirik.

Pradip Lama, the secretary of the Darjeeling Association of Travel Agents (DATA), said: "I will not attend the GTA programmes tomorrow. This is because they will be celebrating the World Tourism Day tomorrow and observing a strike the next day. The strike will hamper tourism. My conscience does not allow me to attend the celebrations." 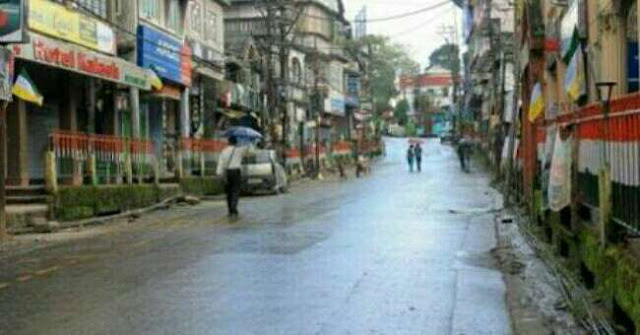