- September 24, 2016
A youth who claimed to be a Sikkim Krantikari Morcha member lodged a police compliant against party chief P.S. Golay last night, alleging that the leader had manhandled him and "outraged the modesty" of his sister. The police said they had received the complaint and were looking for Golay. The SKM has rubbished the youth's claim of being a party member and termed the incident a "political vendetta" against Golay. Yesterday around 9pm, the 35-year-old youth from West Sikkim lodged a police complaint saying Golay had called him to his residence at Lumsey area in Tadong around 7pm for some urgent work. The youth alleged that when he and his sister reached near the area, Golay and his supporters started beating him up. When his sister tried to intervene, she was thrashed by Golay. "He hit me on my face. Somehow, we managed to escape and reached the local police station to lodge the complaint," the youth's 33-year-old sister told reporters today. The youth claimed that he had been an SKM member since 2011. According to sources, the youth and Golay have some financial disputes. A police sources said a case under Sections 354 (outraging modesty of a woman) and 319 (causing grievous hurt) have been brought against Golay. "We have registered a compliant and are looking for him (Golay)," said East district police chief D.B. Giri. Tadong is in East district. Sources said Golay was not at home when the police had gone looking for him last night. The SKM has denied the youth's claim that he was a party member. "This is a political vendetta against our leader because our party is gaining popularity. Let the law take its own course. He (the youth) is neither a party member nor was he manhandled by our leader," said the publicity secretary of the SKM, Birendra Tamling. (Telegraph) 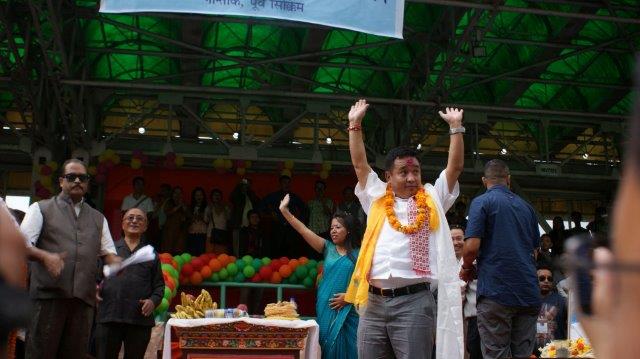