Migration of a large number of workers and human trafficking have made the conciliatory moves to settle disputes in closed and distressed tea gardens of North Bengal ineffective.

The tea garden Lok Adalats held under the aegis of State Legal Services Authority started from January 17, when Manjula Chellur was chief justice of the high court.

Expressing concern over the ongoing problems in closed tea gardens, she had earlier suggested conciliatory and mediation approaches to settle the issue. Hence, the Lok Adalats are being held in different tea gardens of North Bengal according to her suggestion.

But the data collected from the last five Lok Adalats show that migration of a large section of workers from closed and distressed tea gardens has put a question mark on the effectiveness of the Adalats. Issues like provident fund, MGNREGA, ration cards, old age pension, gratuity, housing, toilets and financial assistance for the workers of locked out industries (FAWLOI) and damage caused by elephants were settled through Lok Adalats. The first Lok Adalat on January 17 at Gungaram tea garden solved all the 25 provident fund cases. The garden is operating and there is no dispute as such.

Amit Sarkar, the general secretary of Darjeeling District Legal Aid Forum, said, “Failure of petitioners to turn up during Lok Adalats is one of the main reasons why less number of cases got settled in closed tea gardens.”

Sources said it takes month’s preparation to organise Lok Adalats and get the petitioners file the cases. Though the workers of closed tea gardens file cases, many of them migrate in between in search of livelihood. This results in only small percentage of petitioners turning up for Lok Adalats. In the absence of petitioners, the judges cannot announce decision. 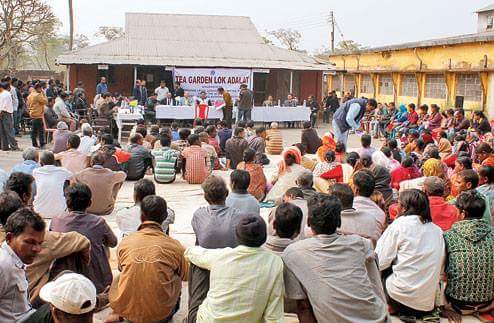