- September 08, 2016
Falakata Gold Cup an I.F.A registered tournament run by Falakata Youth Association, was won by KFC yesterday.
KFC beat junior East Bengal 2 - 0.
In the 3rd minute of the first half, on the through pass from Raj Subba, Amir Lama took a powerful shot which kissed the net of Junior East Bengal. Rupam Sharma and Bidur Chhetri of KFC  missed one each chance in first half.
In the second half at 11 minutes again Amir Lama of KFC tried to beat the opponent goal keeper but not succeed. Anit Rai and Soren Subroto of KFC missed chances at 18 and 21 minute respectively.
In the 23rd minute of 2nd half Junior East Bengal had a golden chance which the defender of KFC Pramod Karketa wonderfully prevented.
Again in the 26 minute a shot taken by player of Junior East Bengal was saved by KFC's goal keeper Nantu Mazumdar.
At the 29 minute, on a through pass from Anit Rai, Amir Lama scored another goal for the team. Final score KFC 2  Junior East Bengal 0.
Amir  Lama won the man of the match trophym while Nantu Mazumdar won the best Goal Keeper - both of KFC.
"We will take on North Bengal Armd Police Brigade in semi final of Mainaguri Gold Cup" said Suren Pradhan Working President of KFC
DC 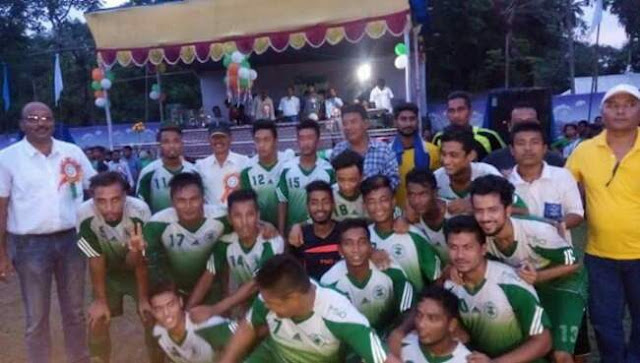