Four persons have been arrested by Sikkim Rangpo Police on drug charges in separate incidents.

Three youths identified as Sandeep Magrati (22), R/O Upper Syari, Gangtok, Prayesh Lohar (24) and Samir Pradhan (21), both residents of Bahai School Road, Tadong were intercepted at Rangpo Border Check Post at about 6.20 pm. 202 capsules of Spasmoproxyvon, 34 tablets of Nitrazepam and a bottle of contraband cough syrup were recovered from their possession. The trio were travelling in a Siliguri - Gangtok bound SNT bus.

In another incident, a Siliguri - Singtam bound taxi jeep driven by accused Dilip Subba (37), R/O Sukya, Darjeeling (WB), A/P Bardang, Singtam was intercept at Rangpo Border Check Post at about 9 pm yesterday evening. Checking of vehicle led to recovery of 64 bottles of contraband cough syrups which were found packed in a sack and concealed under the bonnet of the vehicle.

A case under relevant section of Sikkim Anti Drugs Act, 2006 has been registered against the four accused persons and is under investigation. 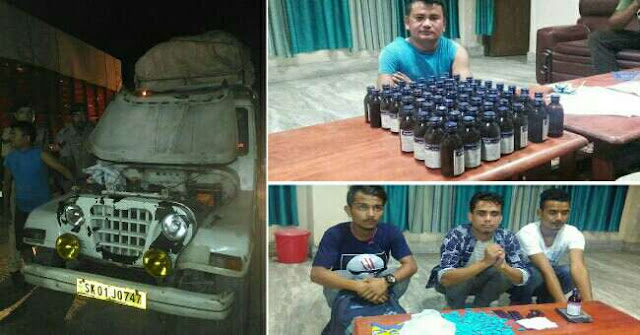